Poll: 48% of Americans Say Leaving Afghanistan is a 'Good Idea' 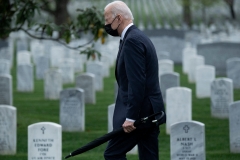 (CNS News) -- A new survey shows that 48% of likely voters believe President Joe Biden's decision to withdraw all U.S. forces from Afghanistan by Sept. 11, 2021 is a "good idea."

U.S. troops have been in Afghanistan since October 2001, nearly 20 years now. (For comparison, the U.S.'s direct involvement in World War II lasted less than four years.)

In the national survey of 1,000 likely voters conducted April 15-18, Rasmussen Reports asked, "President Biden announced this week that all U.S. troops would be withdrawn from Afghanistan by September 11. Is this a good idea or a bad idea?"

The poll was conducted by telephone and online. It has a margin of error of +/-  3 percentage points with a 95% level of confidence.