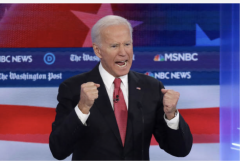 (CNSNews.com) - Former Vice President Joe Biden sent out a pair of tweets at midday on Monday pointing to what he calls the “many crises” America is facing under President Donald Trump and asking if anyone believes there will be “less violence” in the country if Trump is reelected.

In a follow-up tweet, Biden asked: “Does anyone believe there will be less violence in America if Donald Trump is reelected?”