Joe Biden: ‘We Need to Restore Honor and Decency to the White House’ 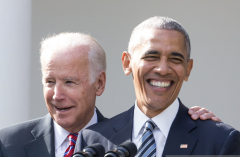 (CNSNews.com) - Former Vice President Joe Biden, who is the Democratic presidential nominee, sent out a tweet on Sunday saying that America needs to restore “decency to the White House.”

“We need to restore honor and decency to the White House,” Biden said in the tweet.

In another tweet that he sent out on Saturday, Biden criticized President Donald Trump for golfing.

“Mr. President,” Biden said in the tweet, “enough with the weekend golf trips and erratic tweets. It’s time for you to get to work to control the spread of the virus.”

That tweet forwarded another one that had an NBC New video of Trump golfing.