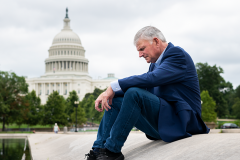 (CNS News) -- Reflecting on the Senate run-off elections in Georgia, where two Democrats beat their Republican rivals, Reverend Franklin Graham said Americans need to "pray for our nation" because, he believes, "God's judgment is coming."

"The votes are in, but is the election over? I have no clue," said Graham in a Jan. 6 post on Facebook. "I guess we just have to wait and see."

"But I do know that we need to pray for our nation," he added. "We are in trouble."

Jesus Christ expels the money-changers from the temple.

"I believe God’s judgment is coming, for the sins of our nation are great and they are a stench in the nostrils of our Creator," said the evangelist.

Franklin Graham is the son of the late beloved pastor, Billy Graham.

If the election results proceed as expected, the Democrats will control the Senate, the House and the White House.

President-elect Joe Biden and Vice President-elect Kamala Harris have promised to implement many left-wing policies through their administration. As one example, in their campaign material it states, “On his first day in office, Biden will reinstate the Obama-Biden guidance revoked by the Trump-Pence Administration, which will restore transgender students’ access to sports, bathrooms, and locker rooms in accordance with their gender identity."