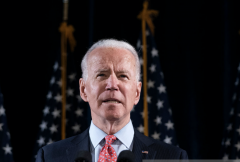 (CNSNews.com) - President Donald Trump’s reelection campaign has posted a background paper arguing that Joe Biden’s record on LGBT issues is “nothing to be proud of” because Biden, in the past, was often not an aggressive champion of the LBGT cause.

“Biden’s record shows he was no leader on LGBT rights,” says the Trump campaign website.

“In 1993, Biden voted to block the immigration of HIV+ individuals into the United States,” it says.

“In 1994, Biden voted to cut off federal funding for schools that taught ‘acceptance of homosexuality as a lifestyle,’” said the campaign.

“In 1996, Biden voted for the Defense of Marriage act, which defined marriage as between one man and one woman,” said the Trump campaign.

“In the 2000s, Biden claimed that same-sex marriage was a ‘state’ issue and repeatedly said that marriage was ‘between a man and a woman,’” said the Trump campaign.

The Trump campaign backgrounder delved deeper into the fact that Biden had voted for a proposal sponsored by Sen. Jesse Helms (R.-N.C.) and Sen. Bob Smith (R.-N.H.) to cut off funding of public schools that “taught acceptance of homosexuality as a lifestyle.”

“The Amendment ‘cut off federal funds to any school district that teaches acceptance of homosexuality as a lifestyle,’” the Trump background paper continued.

It then quoted an Associated Press story:

“The Senate voted Monday to cut off federal funds to any school district that teaches acceptance of homosexuality as a lifestyle. The 63-36 vote on a proposal by Sens. Jesse Helms, R-N.C., and Sen. Bob Smith, R-N.H., came during debate on reauthorization of the Elementary and Secondary Education Act, which provides $12.5 billion in federal funds to the nation’s public schools.”