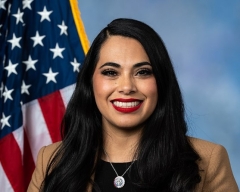 She also said the Biden administration is destroying the southern border and does not care about immigrants or the American people.  Flores, representing Texas’s 34th District, is the first female Mexican-born member of the U.S. House of Representatives.

In a discussion with several other conservatives onstage, Flores said, “Most people in South Texas cannot visit their families, as well, because of the criminal organizations that have taken over the southern border. And it’s only gotten worse ever since Biden got elected. I wish it was different, but this is really hurting us all and not just in South Texas but really the entire country.”

She then called attention to the child sex trafficking at the border and stated the government needs to secure the border to prevent these crimes.

“We’ve had over three million people cross illegally into our country,” said Flores. “Child sex trafficking is a real problem in this country, and if we want to stop child sex trafficking, we must secure our borders. And this should not be political.”

Flores said the Biden administration “destroyed the southern border” through its policies and that the Democratic Party does not care about the American people.

"The Democratic Party has abandoned our values. We’re pro-God, pro-life, pro-family, all about hard work. It’s in our DNA, we are conservative, and those values do align with the Republican Party." - @MayraFlores2022 https://t.co/V8LJT3xE8z

Despite record numbers of illegal migrants crossing into the U.S., President Biden has not enacted stronger measures to secure the border, according to the Washington Examiner. Further, Biden is ending “Remain in Mexico,” a program enacted under President Trump requiring all non-Mexican immigrants to wait for asylum hearings in Mexico, as opposed to the United States.

Governors Greg Abbott (R-Texas) and Doug Ducey (R-Ariz.) have criticized the president’s lack of control at the border, which has resulted in “a record-breaking 3 million migrant arrests.”'

Abbott and Ducey have sent busloads of illegal migrants from Texas and Arizona to Washington, D.C., a sanctuary city, to send a message to Washington about the crisis in the border states.

Texas will send buses of migrants to D.C. until Biden does his job of securing the border. pic.twitter.com/lN85sxRfqJ

In an editorial, the New York Post wrote, “Migrants are streaming into the country in droves, assisted by cartel coyotes and left-leaning nonprofits…. US Custom and Border Protection officers do next to no enforcing. There’s not enough of them.”

“So, they’ve resorted to working with the cartels and coyotes, coordinating on ‘when and where drop-offs will happen,’” claimed The Post.  “That’s right: Uncle Sam has effectively handed control of the border to the criminals profiting off of moving people across it. It’s the direct result of President Joe Biden’s hot mess of a border policy.”

President Biden has not visited the border since he took office, nearly two years ago.

Texas is doing the job the federal government should be doing. pic.twitter.com/JY6OjVt3d9