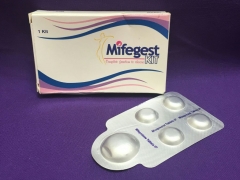 (CNSNews.com) - On June 30, a federal judge blocked an Indiana law initially set to go into effect on Thursday that would require abortion providers to inform women of a treatment to reverse the effects of the first abortion-inducing pill.

"While the State may require abortion providers to give a woman seeking an abortion certain types of information as part of the informed consent process, that information must, at a minimum, be truthful and not misleading," Judge Hanlon wrote in his ruling.

The Associated Press reported that Judge Hanlon handed down the ruling after requests from various abortion rights groups. The temporary injunction will put the law on hold until the lawsuit challenging it receives a judgment.

The Indiana American Civil Liberties Union (ACLU) released a statement claiming “There is no scientific evidence that a medication abortion can be reversed after a patient has taken the first medication.”

“Forcing providers to give their patients this misinformation is both unethical and unconstitutional,” they continued.

The court did not, however, rule that the disclosure of information regarding the abortion pill was unconstitutional, only that the language was not consistent.

According to Tristate, Indiana Republican Gov. Eric Holcomb signed the bill on April 29, after the Indiana state legislature passed it.

HB 1577 states, "A physician shall also provide, orally and in writing, along with other discharge information, the following statement: "Some evidence suggests that the effects of Mifepristone may be avoided, ceased, or reversed if the second pill, Misoprostol, has not been taken. Immediately contact the following for more information at (insert applicable abortion inducing drug reversal Internet website and corresponding hotline number)."

Mifepristone is the first drug dispensed in drug-induced abortion, followed by Misoprostol. Research says the effects of the initial drug may be reversed if the second drug has not been taken.

Many pregnancy centers offer the abortion reversal treatment, which employs the medication progesterone within 24 hours, or even 4-5 days, according to Colorado Springs Pregnancy Center.

The use of progesterone to reverse the effects of an initiated abortion is successful between 64%-68% of the time, according to a study by the National Library of Public Medicine.

They also concluded that there was "no apparent increased risk of birth defects."