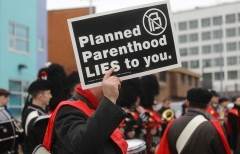 (CNSNews.com) -- The last abortion clinic in Missouri could close because its license has yet to be renewed by the Missouri Department of Health and Senior Services (DHSS), which is concerned about “deficiencies” at the facility and “troubling instances and deviations from the standard care,” which has resulted in “serious patient harm,” said the department.

The clinic, the Reproductive Health Services of Planned Parenthood in St. Louis, Mo.,  is currently operating under a judge's order, an injunction issued on June 10. However, officials from the government and the clinic are meeting this week at an Administrative Hearing Commission (AHA) to hear testimony and reach a conclusion about the facility’s license.

The inspectors also said the “deficient practices” at the clinic included “violations of Missouri law”; “one incident in which patient safety was gravely compromised”; “failed surgical abortions in which patients remained pregnant” and “failure to obtain informed consent.”

The facility submitted its license renewal application on May 16, the last day permitted under law. Then the clinic filed a lawsuit against the DHSS and a judge granted the clinic permission to stay open pending the conclusions of the Administrative Hearing Commission.

In his June 10 order, Judge Michael Stelzer, with the 22nd Circuit Court of St. Louis, ruled that the  “petitioner has demonstrated that immediate injury will occur to its facility if Petitioner’s license is allowed to expire. … Petitioner is entitled to a preliminary injunction.”

It explains the preliminary injunction is granted and says the “petitioner license shall not expire and shall remain in effect until further order of this court.”

The 22nd Circuit Court of St. Louis then ordered the DHSS to make a decision on Planned Parenthood’s license renewal by June 21. The DHSS decided not to renew the license at that time because of reported ongoing deficiencies at the clinic.

In a statement about the issue, the DHSS said on June 13, “The DHSS's investigation is reviewing incidents with significant medical evidence which point to troubling instances and deviations from the standard care, resulting in serious patient harm.

“Five physicians who have performed and (in three cases) continue to perform abortions at RHS's facility have refused to cooperate in our investigation, and they have declined to participate in interviews with the DHSS's investigators. RHS's non-cooperation is unprecedented.

“Due to this ongoing non-cooperation, DHSS has shared with the Court the Statement of Deficiencies and is concerned by the refusal of physicians to provide explanations for the deeply troubling instances of patient care and conduct under investigation.

“In the Court filings, DHSS highlighted several of the most serious deficiencies as raising particular concerns and insists that any Plan of Correction must clearly and specifically address these deficiencies with a remedial plan that is feasible and readily implemented.”

“We feel we have a duty to prevent future harm,” said Dr. Randall Williams, director of the DHSS. “To prevent future accidents or bad outcomes from happening again, to make sure that there is not something systematically going on, if that is the case.”

At a June 21 press conference, Dr. Williams said, “When they look at one patient in particular they found that that patient and that patient’s care had had a very adverse outcome. She had had three abortions in three days, none of us would hope that for anybody regardless of how you view any issue.”

Although the DHSS did not renew the abortion clinic’s license, it was allowed to operate under the court’s preliminary injunction until this week’s AHA hearing reaches a conclusion.

Meanwhile, Planned Parenthood is building an “18,000 square foot mega-clinic” 20 miles from the one that might close.

“The terrifying reality is that access is hanging on by a thread with a narrowing timeline,” said Dr. Colleen McNicholas, an OB/GYN with the abortion facility in St. Louis.  “The truth is, if the Administrative Hearing Commission does not act by Friday, abortion access in the state of Missouri will be gone. This creates uncertainty for the patients we serve."

"The Department of Health and Senior Services Director, Randall Williams, has already proven himself to be harmful to Missourians," said Dr. McNicholas. "His admission that he forced women to undergo medically unnecessary pelvic exams is proof that this state is on a destructive path against Missouri women.”

“Abortion care is health care and patients in need of this service shouldn’t have to wait day by day wondering if they can access care tomorrow, nor should they have ever had to undergo invasive exams [pelvic exams] that have nothing to do with their health,” said Dr. McNicholas.

A baby killed by saline-injection abortion. (Priests for Life.)

“We will continue this fight in the Administrative Hearing Commission, and we won’t stop until every person can access the care they need when and where they need it," she said.

“Planned Parenthood’s stubborn refusal to correct its gross deficiencies is the reason Missouri may soon be the first state since Roe v. Wade in 1973 to be free from abortion clinics,” said Jeanne Mancini, president of the pro-life group March for Life, on Oct. 28.