Biden Climate Envoy Kerry’s Defense of Carbon-heavy Private Jet Use: ‘It’s the Only Choice for Somebody Like Me’ 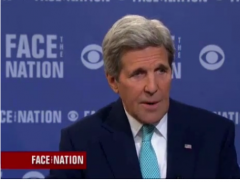 “It’s the only choice for somebody like me,” John Kerry said at the time when asked about his decision to use such a high carbon-producing mode of transportation:

“If you offset your carbon, it’s the only choice for somebody like me, who is traveling the world to win this battle.” “I’ve been involved in this fight for years,” Kerry added, invoking his longstanding efforts to promote an anti-carbon climate policy.

The Federal Aviation Administration (FAA) lists a Gulfstream Aerospace Jet registered under “Flying Squirrel LLC.” The address matches that of the Heinz Family Foundation. John Kerry’s wife is Teresa Heinz-Kerry, estimated to have a net worth of roughly $1 billion. The New York Post also reports that Heinz-Kerry “has invested about $4 million in more than 20 oil-and gas-exploration companies.”

Kerry’s particular model of jet, as listed by the FAA registry, is powered by two Rolls-Royce turbojet engines, features an all-glass cockpit, and costs between one and five million dollars. In 2016, he also listed his 76-foot sailing yacht for $3.9 million.

According to The Guardian, research by Lund University designates private jet owners as “super emitters,“ because “private jet travel emits up to 40 times as much carbon dioxide per passenger as scheduled commercial flights.” The jet has been registered with the FAA since 2005.

Nevertheless, Kerry remains a staunch supporter of Biden’s $2 trillion climate plan, which has already been buoyed by a bevy of executive actions. Within a week of his presidency, Biden canceled the Keystone XL pipeline, ordered a 60-day hiatus for oil and gas permits, and set goals for a carbon-free power sector by 2035.

In remarks at the White House last week, Kerry contended that “the choice of doing the solar power [job] now is a better choice” for the average worker. Sen. Ted Cruz (R-TX) shot back, saying, “What an arrogant, out-of-touch statement for a centimillionaire to say.”

Others slammed Kerry for being flippant about job loss in the oil and gas sectors. Sen. Tom Cotton (R-AZ) tweeted, “John Kerry—who flies in private jets, owned a 76-foot yacht and several mansions—has the carbon footprint of a small nation. Yet he tells energy workers to ‘make solar panels’ when the Biden administration kills their jobs.”

The Daily Wire compares criticism of Kerry to accusations against former Vice President Al Gore. According to a report by The National Center for Public Research in 2017, electricity consumption at Gore’s Nashville mansion was more than twenty times that of the average American’s home