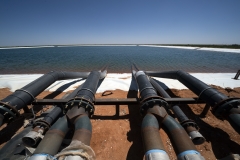 (CNS News) -- Despite 57% of union households supporting Joe Biden in the 2020 Presidential election, many of the largest workers’ unions in the United States have formally denounced the President’s action to terminate the Keystone XL pipeline.

By executive order, Biden halted construction of the multi-billion-dollar oil transportation system on Jan. 20, his first day in office. His action is estimated to cost 26,100 direct and indirect jobs, according to the U.S. State Department.

Consisting of 1.4 million members, the International Brotherhood of Teamsters is one of America’s largest unions. A statement released by the organization on Jan. 21 said, “The Teamsters strongly oppose yesterday’s decision, and we would urge the administration to reconsider it. This executive order doesn’t just affect U.S. Teamsters; it hurts our Canadian brothers and sisters as well who work on this project.”

“It will reduce good-paying union jobs that allow workers to provide a middle-class standard of living to their families,” said the union.  “America needs access to various forms of energy that can keep its economy running in the years ahead. This decision will hurt that effort.”

North America’s Building Trade Unions, which formally endorsed Biden in October, is also “deeply disappointed” by the action, according to a statement released on the 21st.

“Environmental ideologues have now prevailed, and over a thousand union men and women have been terminated from employment on the project,” they said.

The Laborers’ International Union of North America (LIUNA), too, was quick to criticize Biden despite its initial support for his administration.

An official release from Sept. 7 expresses that LIUNA “unanimously, enthusiastically, and proudly endorses Vice President Joe Biden,” contending that “Joe Biden and Kamala Harris stand out as the blue-collar candidates.“

However, a day before Biden’s inauguration, the organization tweeted, “#Pipeline construction has been a lifeline for many #LIUNA members across the country.  The anticipated decision to cancel the #KeystonePipeline will kill thousands of good-paying #UNION jobs!”

Twitter users were quick to point out this abrupt change of positioning. Replying to LIUNA, conservative commentator David Webb tweeted, ”You all threw heavy union support behind @JoeBiden. Frankenstein meet thy monster.”

Although Biden’s decision was part of his broader climate and renewable energy plan, the United Association of Union Plumbers and Pipefitters (UA) issued a statement lamenting the decision, contesting that cutting the pipeline comes with job loss and higher energy costs.

“In revoking this permit, the Biden Administration has chosen to listen to the voices of fringe activists instead of union members and the American consumer on Day 1,” said the UA. “Let me be very clear: When built with union labor by the men and women of the United Association, pipelines like Keystone XL remain the safest and most efficient modes of energy transportation in the world.”

“Sadly, the Biden Administration has now put thousands of union workers out of work,” said the UA.  “For the average American family, it means energy costs will go up and communities will no longer see the local investments that come with pipeline construction.”

Congressman Pete Stauber (R-Minn.) released an official statement rebuking Biden’s decision. “By revoking this critical permit on his very first day in office, President Biden has shown he has embraced a radical view of how to address the economic and security needs of this nation,” said Stauber.  “Although he [Biden] claimed to support labor unions during the campaign, this devastating policy change will eliminate thousands of good-paying union jobs.”