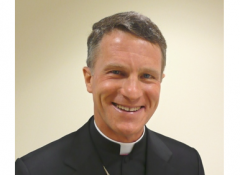 (CNS News) – Explaining the Catholic Church’s teaching on receiving the COVID vaccine, which the church encourages, Archbishop for the Military Services Timothy P. Broglio said a soldier may reject the vaccine, if he feels it violates his conscience.

“No one should be forced to receive a COVID-19 vaccine if it would violate the sanctity of his or her conscience,” said Archbishop Broglio in a statement released on Oct. 12.

Broglio explained that the church has issued a document on the morality of using some of the COVID vaccines, which were tested and/produced using abortion-derived cell lines.  The church said it is morally okay to receive the Pfizer or Moderna vaccines, but the Johnson & Johnson vaccine should be avoided, unless no other vaccine is available.

However, in late August, Secretary of Defense Lloyd Austin issued a memorandum requiring vaccination of all service members against COVID.

“Since then, some service members have refused to take the vaccine and have requested a religious accommodation through the Religious Freedom Restoration Act,” said Broglio. Although the vaccines are considered morally permissible, this does not override a soldier’s “sincerely held religious belief that receiving the vaccine would violate his conscience,” he added.

“The Church treasures her teaching on the sanctity of conscience,” said the archbishop. Quoting Pope St. Paul VI, he wrote, “In all his activity a man is bound to follow his conscience in order that he may come to God, the end and purpose of life. It follows that he is not to be forced to act in a manner contrary to his conscience. Nor, on the other hand, is he to be restrained from acting in accordance with his conscience, especially in matters religious.”

“Accordingly, no one should be forced to receive a COVID-19 vaccine if it would violate the sanctity of his or her conscience,” said the archbishop.

“Even if an individual’s decision seems erroneous or inconsistent to others, conscience does not lose its dignity,” said Broglio.  “This belief permeates Catholic moral theology as well as First Amendment jurisprudence. As stated by the United States Supreme Court, ‘[R]eligious beliefs need not be acceptable, logical, consistent, or comprehensible to others in order to merit First Amendment protection.’”

“The denial of religious accommodations, or punitive or adverse personnel actions taken against those who raise earnest, conscience-based objections, would be contrary to federal law and morally reprehensible,” he wrote.

If a Catholic soldier requests a religious exemption, they must continue to wear masks, social distance, undergo COVID testing, and remain open to receiving a vaccine that did not use an abortion-derived cell line for testing, if it became available, Broglio concluded.