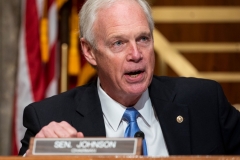 (CNSNews.com) – During a Zoom meeting with #FreeSpeech America on Tuesday, Sen. Ron Johnson (R-Wis.) sharply criticized social media giants, such as Facebook and Twitter, for censoring conservatives on their platforms. He also noted that the censorship is not absolute – conservatives can still get some of their message across on those platforms, for the time being.

However, Johnson stressed that the situation is dire and that if conservatives “don’t win the elections, it’s going to be the end of America as we know it."

“Take a look at the election, we know who won in 2020, it’s hard to say who’s going to win in 2022,” said the senator. “I have a pretty good sense who will. There is balance, we haven’t lost all of our checks and balances, this is not the end of the world here. But, if we don’t win the elections, it’s going to be the end of America as we know it."

#FreeSpeech America is a coalition of more than 70 conservative leaders and organizations nationwide. It is committed to protecting the free speech of conservatives online, and fighting for transparency on social media and demanding equal footing for conservatives on Twitter, Facebook, Google and the other platforms.

“We defend the incredible and revolutionary ideal of free speech in which American democracy is rooted,” reads the mission statement of #FreeSpeech America.

“I think one of the primary powers of a senator or a member of Congress is the soapbox we can step on top of and engage in political speech,” Johnson said. “And, obviously, we’d have a much greater impact if the CEO’s of Facebook and Google and the social media companies were diehard conservatives. We’d have a great deal of impact.”

“Unfortunately, they are radical leftists themselves,” he said, “so my guess is the less political speech, their public pressure has greater impact.”

Bozell noted a recent study by the Media Research Center, which found that social media companies overwhelmingly censored Republican members of Congress by a rate of 54-to-1 compared to congressional Democrats.

That censorship was aimed at Republicans in both the House and Senate and was especially prevalent in stories about COVID-19 or the 2020 election.

“Had the social media platforms allowed [the Hunter Biden Story] into the public square, Joe Biden would not have been elected as president of the United States of America,” Bozell said.

When asked what could be done to combat this censorship, Senator Johnson, Bozell, and Representative Steube agreed that conservatives should continue to fight censorship in whatever ways they can. They also urged conservatives to use alternative social media platforms that allow free speech.

“We have to start populating new opportunities as they arise, but we can’t leave the field to the left on the existing social media platforms,” Bozell said. “I don’t want to leave the field to have 2.7 or 2.9 billion people to be indoctrinated by the left. I think we need to stay on both.”