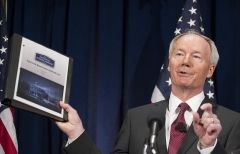 (CNSNews.com) - Arkansas Gov. Asa Hutchinson said Sunday that before President Joe Biden announced that the federal outreach effort on COVID vaccinations will include people going door-to-door, there were community organizations and churches going into people’s homes to make sure that those who are “bedridden” have access to the vaccine.

When asked whether he’s cooperating with the federal outreach effort and how he responds to some governors in the South who say they don’t want the federal government to have any part of it, Hutchinson told ABC’s “This Week,” that his state has “a low vaccination rate,” and “we want all the help we can in order to accomplish a mutual goal and increasing vaccinations.”

“Long before President Biden said that, we have community organizations that's helping us. We have churches that are going into homes. We have people that go into those that are bedridden so that they can have access to the vaccine,” the governor said.

“So, there's nothing dramatic about what the president said in itself. No one wants an agent knocking on a door, but we do want those that do not have access otherwise to make sure they know about it and having the information,” he said.

“Not everybody goes on the internet. Not everybody has that access, and so, how do you get information to them?” Hutchinson said.