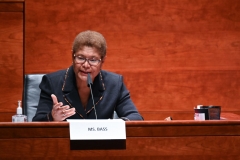 (CNSNews.com) – Rep. Karen Bass (D-Calif.), chair of the Congressional Black Caucus, told CNN’s “State of the Union with Jake Tapper” on Sunday that if she were in charge of Los Angeles County, she would go back to stay-at-home orders, given the recent increase in coronavirus cases.

Tapper noted that COVID-19 is now considered the leading cause of death in Los Angeles County, where Bass lives, according to the county’s health director. The county has more than 40 percent of COVID-positive cases in the entire state, but the county has no plans to shut down, as of Sunday morning. Tapper asked whether she would shut down L.A. County if she were in charge of the county.

“If I were in charge of L.A. County, I would go back to that, and I would be very, very conservative about how we opened up, and so you know that you need to show a certain amount before you open back up. There needs to be a time period, around three weeks, and I think that we didn't strictly adhere to that,” she said.

Bass said that California, and specifically L.A. County, were “very aggressive” in dealing with the virus.

“Our county and our state did what they were supposed to do, but, in hindsight, I think that we opened a little too quickly, and that has been the problem. Now, one thing that I have confidence in L.A. County and L.A. city is that our mayor and our board of supervisors, they are going to follow the science. That will be what determines whether or not we open or we close,” the congresswoman said.

“You really can't go anywhere in L.A. without seeing people with masks on. So, it just shows how challenging this virus is, but if you think about many other states, where the governor is saying one thing, the governors and the mayors are fighting people, you can understand why that's not under control, but L.A. County has done what it should have done in the beginning, opened a little bit too fast, and I know we will follow the science. If the science says shut down, I know we will shut down,” she said.

“Well, I mean, it might be a problem in some places, but the idea that you would cut it across the board, I think, makes no sense at all. There are some states where the cost of living is a heck of a lot higher, like my state in California, and, as you pointed out, there are a lot of people who are not going back to work because they know it's not safe. There's also an awful lot of people that don't have the jobs to go back to,” Bass said.

“So, I think that this is all about, essentially, a state of denial, that we should just get the economy back and everything is going to go away, and, as you pointed out, the economy is not going to get better until we have control over this virus, and so I want to know why you would let people suffer like this,” the congressman said.

“The Republicans have had the HEROES Act for over two months sitting there in their chamber. Why would you wait until people are to the point of running out of their benefits? And they still haven't come up with a plan. They're fighting between themselves,” she added.