Border Patrol President: We Are on Pace to Arrest More People in 1 Year Than We Ever Have in CBP History 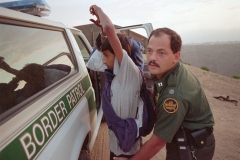 (CNSNews.com) - The U.S. Customs and Border Patrol (CBP) is on track to arrest more people at the border than they have arrested in the history of the Border Patrol, National Border Patrol Council President Brandon Judd said Tuesday.

In an interview with C-SPAN’s “Washington Journal,” Judd said that CBP is on track to beat those numbers this month.

“I don’t have the specific numbers right now to this point in this month, but what I can see is what’s going on on the border, and we are seeing increases. In the month of February, and I am just going to take the Rio Grande Valley Sector in Texas - the busiest sector that we have. They were apprehending somewhere between 750 to 1,000 illegal border crossers a day,” he said.

“They’re now up to close to 2000, so yes, we should be beating the month of February, and what should be concerning is January, February, March - these are typically slow months. These are not the busiest months that the Border Patrol has. The busier months come in April, May, June, July - the out months. So right now, this is very concerning,” Judd said.

“We are on pace in one calendar year to arrest more people than we have ever arrested in the history of the Border Patrol,” he added.

Judd predicted that on the issue of immigration alone, the Democrats could lose the House and the Senate in the next election.

“What I think is very interesting about this from a political standpoint is, this is actually very bad for the Democrats. They are scrambling right now. They understand that on this issue alone, they could potentially lose the House and Senate in the midterms. It doesn’t look like they learned from history yet,” he said.

Judd said that “2016 should have told them that illegal immigration is a huge issue for the American public. Tat’s Republicans, independents, and a majority of Democrats do not like illegal immigration, and so when this explodes like it’s exploding, this is extremely bad for the Democrats and could hurt them greatly going into ‘22.

“If they don’t get it fixed, I believe that they could lose just on this issue alone,” he said.

Judd explained that immigration hearings “are held all over the nation,” which he said, “is the main problem.”

When someone crosses the border illegally and claims asylum, if we do not have the facilities to hold them pending their court case, they’re released into the United States. Then, they are given what is called a notice to appear. They’re supposed to show up to a court appearance.

Those court appearance normally don’t happen for a couple of years. Then, they are given work permits. They build a life here in the United States. They go to court. If a judge orders them deported, the judge will issue a stay on that deportation order so that they can get their affairs in order. Then they’re supposed to turn themselves into ICE ERO. They never do.

Ninety-nine percent of the people that are ordered deported and then are subsequently released, they abscond, and they never leave this country. That’s the problem. That’s the magnet that is drawing people here to the United States illegally.

They know that even if they are arrested, if they get released on their own recognizance pending a hearing, they’re never leaving this country.