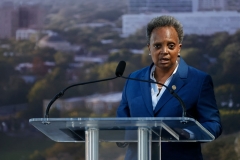 (CNSNews.com) – Parents are voicing their outrage at the Chicago Teachers’ Union’s decision to close Chicago Public Schools and switch to virtual, and it’s a “different dynamic than ever before,” Chicago Mayor Lori Lightfoot told NBC’s “Meet the Press” on Sunday.

When asked whether kids will be in school this week in Chicago, Lightfoot said, “I'm doing everything I can to make sure that that happens. And to be clear, what the Chicago Teachers Union did was an illegal walk-out. They abandoned their posts and they abandoned kids and their families. We are working diligently every single day at the bargaining table to narrow the differences and to get a deal done.

“My team has been working every single day. They're back at it again here Sunday. They were at it yesterday, and we can get a deal done if there's good will on both sides, but fundamentally what we cannot do is abandon the science. We know that the safest place for kids to be is in-person learning in schools, and we've spent hundreds of millions of dollars to make our schools safe,” she said.

“They are safe. We've got the data to demonstrate that. We've got to get the teachers union to get real and get serious about getting back into in-person learning,” the mayor added.

When asked what leverage she has to make sure that schools are reopened, Lightfoot said, “Well, the leverage, I think, we have is that we've got the will of the -- of the people. Parents are outraged, and they are making their outrage known to the teachers union. This is a very different dynamic than ever before. We've got an enormous amount of parent activism.

“They are writing letters, emails. They are protesting. They're holding press conferences. This is an unprecedented level of parent activism all in support of returning to in-person learning, and we know why,” the mayor said.

“We live in a district where 70% or more of our kids qualify for free or reduced lunch, which means they live in households that are poor and working class, which also means that they live in houses with single parents, mostly women of color, who have to work to be able to keep the home together,” she said.

“So this walk-out by the teachers’ union, which is illegal, has had cascading negative ripple effects not only on the students and their learning, their social, emotional welfare, but also on the families themselves,” Lightfoot said.

“It is making them have tenuous financial status because they have to work, but they also have to take care of their kids. This is an untenable situation and completely, utterly avoidable. So I'm going to be on the side of the parents fighting every single day to get our kids back in school,” the mayor added.

Host Chuck Todd pointed out that the teachers’ union has sent the mayor a proposal saying that the public school system should include a metric for when remote learning would be triggered.

“Would you accept a school-by-school metric versus a district one? What do you think is a fair compromise here?” he asked.

“Well, we already sent them a school-based metric on Tuesday before they walked out, which they rejected without any response, just saying it's not good enough,” the mayor said.

“So last night, my team turned around a point-by-point response that deals with school metrics, which deals with testing and a number of the other things that, frankly, we don't have disagreement on. The biggest issue is remote testing, remote learning, which we categorically reject,” she said.

“We have set up, and I think responded, to many of their issues regarding testing. So I think we can get agreement there. We have put together a revised proposal for a school-by-school metric, which really mirrors what we've been doing, Chuck, all along this year. We haven't sat idly by and let COVID rage through our schools,” Lightfoot said.

“When there's been a necessity to shut down a classroom or shut down a school to go to remote learning, we've done that, and what I think is really important is, of the, of the cases that we can tie to schools, it's 53 outbreaks, and an outbreak is defined as two or more,” the mayor said.

“Our average is 2.5 kids in the school setting, where we believe that they may be related to schools. So we're doing what we need to do. We're following the science, and what I won't do is allow the teachers union to politicize this surge or the pandemic in general,” she said.

“People are nervous. They are scared. We get that, but the thing to do is to lean into the facts and the science and not abandon them in a panic,” Lightfoot said.