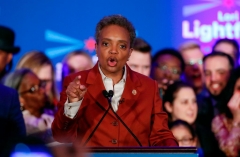 (CNSNews.com) – Civil rights attorney Leo Terrell accused Chicago Mayor Lori Lightfoot of being a racist and implementing systemic racism by refusing to do one-on-one interviews unless the reporters are black or Hispanic.

“Let me very clear. I've been waiting all day for this. Lori Lightfoot is a racist, not a covert racist, an overt racist. The reason why she gets away with it is because She's black and she got that D in front of her name. You want to know what systemic racism is? When the mayor of a city institutes a policy, this is systemic racism, but she gets away with it,” Terrell told Fox News’s “Hannity.”

“Rashida Tlaib is anti-Semitic, but because she got a D in front of her name, and people out there listening, we have to stop this, because this race card is being used exclusively by Democrats because they are minorities. You got Joe Biden afraid to challenge Talib. They put Kamala Harris, who basically called him a racist because she's black? She gets a pass?” he said.

“Lori Lightfoot, I want everyone to hear this, is a racist regardless of her color, and she is implementing systemic racism in the city of Chicago. Sue her,” Terrell said.

Talk show host Larry Elder called Lightfoot’s request “absurd,” adding that “it’s all designed to divert attention from the problems in that city.”

“The city's finances are in the toilet. Their unfunded pension liability contribution is one of the largest growing items on their budget. You’ve got violent crime up year to year, homicides up year to year. The city’s a third black, a third white and a third Hispanic, yet between 70 and 80 percent of homicides are black on black and the majority of those are unsolved,” he said.

“The school system is horrific,” Elder said, adding that “39 percent of Chicago Public School teachers with school age kids put their own kids in private school.”

“That is four times higher than the national average. So the mayor has problems to deal with, and I think that yelling and demanding that a reporter be a certain kind of race is one of the least of her concerns, all designed to divert from the disaster that is known as Chicago,” he said.

Elder said that hostility towards Israel among the Democratic Party began with the Obama administration, and he accused Rev. Al Sharpton of being “one of the leading anti-Semites in the nation.”

“Let’s remember. Obama criticized the so-called building of settlements. One of Obama’s top aides referred to Bibi Netanyahu as chicken [bleep] and a Democrat king maker is one of the leading anti-Semites in the nation. His name is Reverend Al Sharpton, and all of these Democrats, including Joe Biden, kissed his ring in order to get their nomination and to run for president,” he said.

“So they’ve got a serious problem with anti-Semitism, hostility towards Israel in the Democratic Party. It’s going to inure to the benefit of the Republicans when more Jews realize this and more Jewish donors stop donating so much money to the Democrats Party,” Elder added.