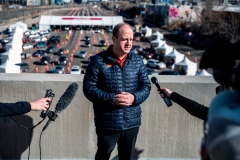 Colorado Governor Jared Polis speaks to the press as he visits the site of a mass vaccination drive through at Coors Field baseball stadium on January 30, 2021, in Denver, Colorado. (Photo by CHET STRANGE/AFP via Getty Images)

(CNSNews.com) - Colorado Gov. Jared Polis would not say Sunday whether a bill he recently signed into law - the Reproductive Health Equity Act, which says pregnant mothers have a fundamental right to continue their pregnancy or have an abortion - means there is a right to abortion up to birth.

When asked whether the law means there’s a right to abortion up to birth, Polis said, “What we did here is we preserved essentially the Roe versus Wade protection in Colorado because fundamentally, Shannon, what we believe is this is not about the government making that decision. It's about women making that decision, and to sort of win this battle, it's about the hearts and minds of women, not the laws of men.”

“Is there a limit on abortion up through nine months in Colorado?” Fox News host Shannon Bream asked.

POLIS: It's the same as it has been the last several decades. People face gut-wrenching decisions every day, whether it's rape or incest. They're often having to choose between the life of the mother and child.

For the government to insert itself in that conversation between a doctor and a woman, a faith leader and a woman, is simply wrong. I think we need to approach this a different way.

I think there's a lot of common ground around reducing unwanted pregnancies, empowering women and men with birth control, and really generating a culture of responsibility about what it means to be a parent.

BREAM: OK, and I will take that as a yes, that there is an option for abortion up to birth.

Let's talk about that because when "AP" polls specifically by trimester frameworks, and they asked people, should it be legal or illegal -- at 80 percent, when we get into the third trimester, people say it should usually be illegal.

Even "The New York Times" noted in an article updated this May, the United States is one of over a dozen countries that allows abortions for any reason beyond 15 weeks of pregnancy. "The Times" goes on to note that includes North Korea and China. Is that the company that Coloradans wants to be in?

POLIS: So, this was on the ballot in Colorado just a year and a half ago, overwhelmingly rejected banning third trimester abortions and that's because, you know, people know how painstaking and difficult that is.

When you know that, you know, you might be near birth and you find out your baby doesn't have lungs and won't live for more than a few minutes outside of the womb -- I mean, this is a really difficult thing that women face, and the right answer is, of course, to make sure that we trust people to make that decision and people have the freedom to do that.

We don't say big governments are going to insert itself and tell them how to handle something that sadly really doesn't have a right answer.

BREAM: We asked simply, do people think that abortion should be legal or illegal? Just straight up question and our latest FOX News polling, 44 percent said legal, 54 percent said illegal. That's the lowest number we've tracked for legal and it's the first time illegal has polled above 50 percent.

So, there in Colorado, conservative leaders say these are the kind of numbers that are their side.

Jeff Hunt, director of the Centennial Institute, says: My contention is the trend is with us. We may lose the battles but we will win the war in the state. They're talking about ballot measures for 2024. Are you worried about your work being undone in coming elections?

POLIS: Not particularly. It's been on the ballot, as I said, as recently as a year and a half ago. Voters agreed that the government should not interfere with this basic freedom, this basic decision.

We implemented free preschool in Colorado. We're making daycare more affordable. We want to make sure that people know about these things, and, of course, we want to make sure that we can increase access to birth control and -- for both men and women, and really build that culture of responsibility and also, understanding the importance of consent for both men and women to help reduce the number of unwanted pregnancies.