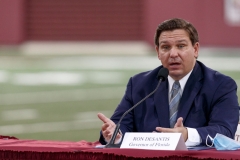 (CNSNews.com) – Florida Gov. Ron DeSantis said Sunday that Facebook was essentially acting as an “arm of the state” by censoring people’s content that was actually true.

“You pointed out something important, Maria. What they censored was actually true. They called it a conspiracy theory if you said this may have leaked from the lab. They were also censoring around the same time last year any criticism of lockdowns, and we know now lockdowns didn't work. States like Florida that were open were better off for it,” DeSantis said.

“And so you often hear people say, ‘Hey, these are private companies. They can do what they want,’ but here’s an example of working with Fauci where Facebook you could argue is essentially acting as an arm of the state, because they are suppressing what the government wants suppressed, and so I think this issue with Big Tech is unlike anything we’ve seen. They have massive amount of power,” he said.

"These are monopolies that are much stronger than the monopolies of the early 20th century. They control in effect a handful of companies, a huge percentage of the political speech in this country. So I think when you have situations, they’re not just censoring based on partisanship,” the governor said.

“Obviously, we’ve seen conservatives be censored, but when they’re censoring things about some of the most important issues that we have ever addressed - how COVID started, whether lockdowns work - you know they're doing damage to society,” DeSantis said.

When asked whether Florida is considering legal actions against Facebook, the governor said, “Well, I know that the state’s already involved in some of the multi-state litigation that predated those revelations. I mean, obviously I would support any ways that we can vindicate the rights of individual Floridians to be able to converse about public issues.

“Now our bill is the first of its kind. It really tracks what Justice Clarence Thomas laid out in one of the concurrences a few months ago where these companies really are more kind to common carriers, and so they should be treated as such, and our view is yes, you can have certain obviously guidelines or however you do it, but you gotta apply it evenly, and if you don't, you are advertising as an open platform,” DeSantis said.

“You're saying you're not publishers, but you're acting as publishers by stifling speech that you don't like. That's a fraud on the consumer, and people deserve to vindicate rights in court,” he said.