Skip to main content
AP: 'Many Haitian migrants...are being released in the U.S., two U.S. officials said.' DHS won't say how many... 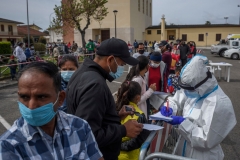 Members of the Indian community wait in line to receive a Covid-19 swab test in the Borgo Hermada neighbourhood, which is home to around 2500 Indian people, on May 3, 2021 in Terracina, Italy. (Photo by Antonio Masiello/Getty Images)

(CNSNews.com) – The Biden administration announced last week a travel ban on India, citing the coronavirus, but according to former FDA Commissioner Dr. Scott Gottlieb, if the goal is to prevent introduction of the COVID-19 variant 6.1.7., “it’s here already.”

“These travel restrictions could serve a purpose, but we need to be clear about what that purpose is. Right now, we still have restrictions in place against travel from China and the U.K. That doesn't make a lot of sense. So I'm not really sure what the overall strategy is around these continued travel restrictions that we have in place,” he said.

“When people see these-- an enormous number of cases and the virus blooming in different parts of the world, how should they process that with respect to variants, in other words, more disease. Does that create the conditions for more variants that could then come back to the United States and cause us issues here?” host John Dickerson asked.

“Look, that's absolutely the case, the more that this virus continues to circulate, the more it's going to continue to mutate, but the reality is that these variants aren't just cropping up in one market and in migrating around the world. They're cropping up simultaneously in every market,” Gottlieb said.

Gottlieb said he’s hopeful that the Food and Drug Administration (FDA) is going to consider authorizing giving the Pfizer vaccine to 12- to 15-year-olds.

“I'm hopeful the FDA is going to authorize that in a very short time period, and I think when-- once that gets authorized, I think you'll pick up probably 5 million kids will get immediately vaccinated. There's about 17 million children between the age of 12 and 15. I think we'll pick up about 5 million immediately,” he said.

“I think probably another 5 million, 5 to 7 million would get vaccinated over the course of the summer before the school year, so that'll be incremental. Americans getting vaccinated against COVID and hopefully providing protection in an age group that has been susceptible to the infection. Older kids are more susceptible, certainly than younger kids,” Gottlieb said.

As to whether vaccinating kids will go through the regular system or whether parents will go through pediatricians, Gottlieb said, “Yeah, it's a great question. There's a lot of effort underway right now to try to break the vaccine down into units that can be distributed to doctors' offices to allow pediatricians to provide those vaccinations.

“And I think that's ultimately the way we're going to get more kids vaccinated. I think initially you're going to see vaccination sites start to offer vaccines to children. Pharmacies will as well, but, really, the key to getting kids vaccinated is doing it through pediatricians,” he said.

Dickerson asked for Gottlieb’s assessment of New York City Mayor Bill de Blasio’s decision to fully reopen New York City on July 1st despite the fact that the state has the sixth highest count of new cases over the last seven days.

“New York's leading the country really in testing. So they're turning over a lot of their cases, and we're not even capturing all the negative tests. There's a lot of testing going on at home now with at-home tests that aren't necessarily getting reported unless they're positive cases,” he said.

“So I think the positivity rate around the country is even lower than what we're recording, but we're seeing cases come down with seeing hospitalizations come down, which is really the hardest measure of the overall impact of COVID. Hospitalizations are a pretty good indicator of where the direction is heading and they're coming down as well. So I think these gains are pretty sustainable at this point,” Gottlieb added.