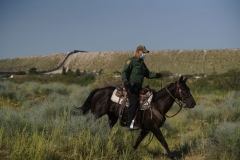 “We have nation state threats. We have terrorist threats we can't get into in this type of a forum, but they are real. They exist, and they want to come across that border. Statistically, it always includes rapists, murderers, potential terrorists every single year if you look at CBP's statistics publicly available,” told Fox News’s “Special Report with Bret Baier.”
“Those all exist in who we actually catch, so to think there’s not just as bad or worse people in those getting away would be naïve,” Scott said.

When asked what he says when DHS Secretary Alejandro Mayorkas says the border is as secure as it was before, Scott said, “That's just not true, and while many of the political appointees assigned currently literally just lack the knowledge and expertise that they could make a statement like that and believe that it was true, he’s a very smart guy.

“He’s got a lot of experience in homeland security. He knows what he's doing. He knows the impacts. I’ve sat in a room and heard some of the comments he made. He knows what's going on, and he knows that border is not as secure today as it was on January 19th,” the former Border Patrol chief said.

Meanwhile, NBC News reported Thursday that Mayorkas, on a call last week with senior DHS officials, asked whether the department was “prepared for a worst-case scenario in which 350,000 to 400,000 migrants cross the border in October, according to two DHS officials familiar with the conversation.”

That’s if Title 42 was lifted because of U.S. District Judge Emmet Sullivan ruled Sept. 16 that use of Title 42 did not give the Biden administration the authority to block asylum-seekers from crossing the southern border.

Sullivan’s order, which was issued in response to a lawsuit by advocacy groups, was set to go into effect 14 days later, which was last Thursday.

However, the Biden administration appealed the ruling and may still appeal to the Supreme Court if the U.S. Circuit Court of Appeals for Washington, D.C., does not intervene.

DHS issued a statement on Monday, saying it would “continue to process individuals” according to Title 42, and would therefore continue to “expel single adults and families” encountered at the border.

The Department of Homeland Security will continue to process individuals in accordance with the updated Centers for Disease Control and Prevention’s (CDC) Title 42 Order.  As part the United States’ COVID-19 mitigation efforts, DHS will continue to expel single adults and families encountered at the Southwest Border.

Title 42 is a public health authority, not an immigration authority, and its continued use is thus dictated by the CDC.  As announced on August 2, 2021, the CDC will review the latest information regarding the status of the COVID-19 pandemic and associated public health risks every sixty days to ensure that the Order remains necessary to protect the public health.  DHS will continue to defer to public health experts on decisions related to Title 42 while continuing to develop safe, legal, and orderly pathways for migration.