Fraternal Order of Police National VP: ‘Our Profession Is Dying’ 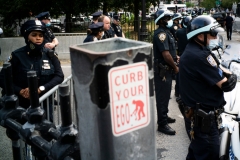 NYPD officers block the entrance of Brooklyn Bridge as protesters get ready to march and others take part in a protest encampment near NYC City hall on June 25, 2020 in New York, NY. (Photo by Eduardo MunozAlvarez/VIEWpress/Corbis via Getty Images)

(CNSNews.com) – Joe Gamaldi, national vice president of the Fraternal Order of Police, told Fox News’s “The Faulkner Focus: Police in America” on Tuesday that the law enforcement profession is dying because of the defund the police movement, and he called on lawmakers to make law enforcement part of the conversation on police reform.

“I think it's important number one to actually talk about qualified immunity because I feel like there’s so many false narratives surrounding it. I know – surprise, 2021 and we have false narratives around police work but qualified immunity does not protect officers from criminal charges or internal investigations or internal discipline or even being fired,” Gamaldi said.

“All it does is protect an officer who is within policy, training and the law from civil liability. It doesn't protect an officer who knowingly violates the civil rights of an individual in our community. And another thing too. People seem to think that qualified immunity is just a given. That's not the case. In the last 200 cases handled by the lower courts, qualified immunity was only given to 57% of the officers,” he said.

“So if you’re asking what we need, we need support from our community abut we need to be part of the conversation and National FOP stands ready to have a conversation with anybody that wants to have a fact based back and forth about police work. When Congress met and the House of Representatives passed the George Floyd act, they didn’t even ask input from law enforcement. There was no debate on the floor,” Gamaldi said.

“Thankfully, Senator Scott and his team are willing to hear from us, so that we can tell them we agree with certain things in these bills. We agree that there needs to be reforms but removing qualified immunity. Harris, I don't know how to be any more frank than this. Our profession is dying,” he said.

Gamaldi noted that police retirements are up and recruitment is down in various states throughout the nation, and crime has skyrocketed.

“In New York, our retirements were up 75%. On the recruitment side, the New Jersey state troopers said they saw 90% reduction in applications. In Colorado, 70% of agencies said that their recruitment is tanking and as a result of these things happening in law enforcement are communities are harmed,” he said.

“We have seen over 20,000 homicides last year, which is the first time we've been over 20,000 in this country since the 1990s. Our profession is dying. Our community is suffering, and there’s not going to be anybody left to take this job,” Gamaldi added.

“We have completely with a broad brush dehumanized the people that are donning the badge, and that is really one of the big problems we're seeing. It’s us versus them, and in the case of our local police, they’re retiring and getting out of policing in droves. In my home county of Clay County, we have over 100 police officers that have resigned since 2018,” the congresswoman said.

“As the wife of a first responder, this is pretty personal to me, because we are part of the community and to have communities basically turn around and attack their own, this is just creating incredible strife,” Cammack said.

“As far as getting things done on Capitol Hill, I challenged my Democrat colleagues to a ride along so that they could see first-hand exactly how split-second decisions are made in the heat of a moment where you have to make decisions of life or death in some cases, and yet not a single one of them has taken me up on it. So we’re going to be doing these ride alongs and showcasing this for them so they can see first-hand,” she said.

When asked to react to Gamaldi’s assertion that the law enforcement profession is dying, Cammack said, “Absolutely, and it's absolutely heartbreaking to hear that, and you know, I'm seeing it firsthand. I'm hearing it from officers everywhere. The bill is not a reform bill. This bill is redirecting lifesaving funds for our departments to groups like NAACP and the ACLU.

“It’s taking the very equipment that’s keeping them safe as they work in the communities that we all love, and it’s just stripping them from the ability to actually go out and serve. This bill is dangerous, and if we’re serious about investing in our communities and making them bigger and better and stronger, you don't defund police,” the congresswoman said.

“You don’t defund the very backbone of our communities that are working every day to keep us safe. You invest. I don't care if you’re Republican or Democrat, you invest in the things that you care about. So if you’re serious about getting our communities safer and stronger, invest. You don't divest. You invest,” she said.

“That's my message to my colleagues on Capitol Hill, and also, I’d say go see firsthand. You talk a big game. Walk the walk,” Cammack said.