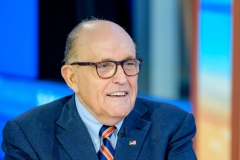 “This would not have happened when I was mayor of New York City. I think you can ask anyone. It should not happen, because this is not a protest for Mr. Floyd. This is a desecration of Mr. Floyd's memory,” the former New York City mayor said.

“People don't steal liquor. They don't break open liquor stores and walk out with bottles. I watched that Minnesota. You are demonstrating to Mr. Floyd when you're getting liquor to get yourself drunk or to sell it? You don't steal bicycles. You don't steal televisions. These people are doing so much damage. To us it’s really, really horrifying, and we have to reject it.,” he said.

Giuliani said he watched the violence and looting in his city “with a tremendous amount of sorrow and a broken heart.”

He said as mayor of New York City for eight years, he’d never seen anything like it.

“I can tell you we took over a city that had two riots in three years, this kind of thing, I never had this happen in eight years ever,” Giuliani said.

When that situation happened with Mr. Floyd, and I have to tell you the shame of this nobody disagrees, nobody white, black or in between disagrees that what happened to Mr. Floyd is an outrage. I am about as pro-police as you can get. I grew up in a family with five police. I worked with the police for 30 years of my life, as a prosecutor, a high-ranking Justice Department official,” he said.

I’ve defended them in very difficult situations. I also – I prosecuted and put in jail 70 police officers, so I know the difference, and I don't play judge cases, but I can’t possibly not react to what that officer did. It was almost indescribable. He was warned numerous times that he might be killing the man," Giuliani said.

The former New York City mayor said it “shocked” him to see that the other three officers involved in Floyd’s arrest didn’t stop Minneapolis officer Derek Chauvin from kneeling on Floyd’s neck.

Giuliani said it was clear that there was no superior officer on hand.

“The shame of it. This is something that could have united us. We very often do have disputes over police brutality. There are times in which we had phony and completely exaggerated claims of police brutality by racial incendiaries and racial thugs and criminals who live off these to make money,” he said.

Giuliani pointed out that he wasn’t the mayor during the death of Eric Gardner at the hands of New York City police, but he believes the Gardner case “was closer” than the George Floyd case.

The Gardner case was closer than this. I'm not justifying it or not. I'm just telling you as a lawyer or as a prosecutor, I would have a harder time prosecutor the Eric Gardner case than prosecuting this case. I don't think that murder three is the right charge either. I think it clearly is s murder in the second degree.

I had a long text with Judge Napolitano the other day, and we went over intent together, and unless it turns out that asphyxiation is not the cause of death, then you have a problem with the murder charge, if not for the attempted murder but asphyxiation.

Let's assume that that was the cause of a death - asphyxiation. If that was, then murder two at least - I would have charged murder one in case he wants to plead, then plead him down to murder two. You charge murder three, it’s how you get off with manslaughter and then we’re gonna have another legitimate outrage and hopefully not this. You are absolutely correct to be outraged about what happened to Mr. Floyd.