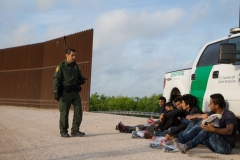 - A Border Patrol agent apprehends illegal immigrants shortly after they crossed the border from Mexico into the United States on Monday, March 26, 2018 in the Rio Grande Valley Sector near McAllen, Texas. (Photo by LOREN ELLIOTT/AFP via Getty Images)

“Let me tell you, when I'm talking to the Border Patrol agents, I talk to folks on the border regularly, and everyone tells me that we're slammed, that we have reached a surge point again. Just two weeks ago we were apprehending about 3600 per day, which is really well above what even Jeh Johnson said was a crisis level,” he told Fox Business’s “Mornings with Maria Bartiromo.”

“Last week it jumped to over 4,000 people a day we were apprehending. That means 120,000 people being apprehended every month now going forward, and that also means that the got-aways are going to be somewhere in the 30,000 to 100,000 range. We're not ever actually sure. We're not getting the COVID testing done that needs to be done,” the congressman said.

“We're back to catch and release. The cartels are still controlling who is coming across the border, and they're open for business. They're advertising again. That's the report I received just yesterday. NGOs from up here are also advertising again, so you're going to see even more caravans. People are massing across the borders, and it is a border crisis,” Biggs said.

“Even the Biden administration is opening up facilities that have been closed under President Trump. So they know that there's this massive influx coming in, and it's crisis proportion again at the border,” he added.

Host Maria Bartiomo noted that there was a crash on the U.S.-Mexico border Tuesday involving an SUV carrying 25 people, which crashed into a semi-truck, killing 13 people.

“You know how you get 25 people in an SUV? I talked to border agents. The smugglers rip out the seats. They pile people on top of each other. They layer them. That's how you fit 25 people in one SUV. Border agents see that kind of thing all the time. We must stop romanticizing illegal immigration. It is cruel. It is wicked. It kills people, and these smuggling organizations are sophisticated,” Miller said.

“Congressman, I think he really encapsulated it well. That was an SUV carrying 25 illegals. They were trying to get into the country. It crashed, and now 13 people are dead. You know, we also do not talk enough about the cartels and how unaccompanied minors are having to face these cartels. It's a dangerous situation. Why are we not talking about this more, and what do you want to hear from the Biden administration about this?” Bartiromo asked.

“Well, it is actually inhumane what happens. So I mean, Steven got it right on the SUVs. They'll cram them through, 20, 25 people in an eight-passenger Ford Expedition or some other SUV. That's what happened yesterday. So that's normal that we see along the border. The other thing is, when you start talking about unaccompanied minors, the vast majority of these unaccompanied minors are ages 14 to 17 right now, and they're male and they're coming in,” Biggs said.

“That tells us a couple things. These are workers or they're gang members. That's really what it is, and when you see little kids that come through, and there's a significant number of those little kids as well - and by the way, it more than doubled the number in the last month that were being apprehended, these little kids,” the congressman added.

“There's human trafficking, sex trafficking, drug trafficking. That’s all that’s going down, and it's all controlled by cartels who are a multi-billion dollar industry and to them people are merely a product. They really don't care about human life, and we see that. We see that regularly,” he said.