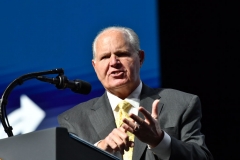 (CNSNews.com) – In a rare appearance on “The Breakfast Club” radio show in New York City, conservative talk radio host Rush Limbaugh said Monday that former Minneapolis police officer Derek Chauvin should have been charged with 1st degree murder in the death of George Floyd during an arrest last month.

"Look, we are all aware of police brutality. We’re all aware of the actions that some rogue cops take, and it’s way too many of them against African-American men, and it’s time to stop. I’m not a policeman. I’m not an executive in the police department, but it seems to me that if those people end up being charged instead of shielded when they commit murder-- there shouldn’t be any legalized murder, and that would be one way to at least get a start on making sure it doesn’t happen,” he said.

Limbaugh said he reached out to the show to discuss the case, because he was “sickened” by what he saw in the video of Floyd’s arrest.

Co-host Charlamagne tha God asked what made Limbaugh decide to speak out now given that numerous police killings of unarmed black people have taken place in the U.S. over the years.

“We’ve seen numerous police killings of unarmed black people in this country. Why is the George Floyd situation the one that’s making you say enough is enough and this needs to stop? Why this situation in particular?” he asked.

LIMBAUGH: Because I’m fed up with it. I’m not tolerant of any of them, but I’m just—I’m fed up with it, Charlamagne. None of this – see to me, and I know that you’re going to disagree with me on this, to me this is not America.

LIMBAUGH: Well see, but it’s not what we can be. It’s not what we have been. We’re the greatest nation in history of the world, and we haven’t achieved that on the basis of—

CHARLAMAGNE: For you though, Rush? I think it’s easy for you to say, because you’re a white male, and that comes with a different level of privilege, and I do think America does work, but it works for the people that it was designed to work for. It doesn’t work for everybody else the way it works for you.

LIMBAUGH: Well it can. That’s the point of America. It can for anybody who wants to adapt to it, for anybody who wants to try to take advantage of the unique opportunities that exist in the United States. We’re the only nation that’s ever enshrined the concept of individual liberty and freedom in our founding documents. We’re the only country that’s ever created a document to govern ourselves by that limits government.

LIMBAUGH: No, no. I didn’t mean to conflate that George Floyd could have stopped what was going to happen to him. Don’t misunderstand. George Floyd is the essence of innocence, but what I’m saying is, is that America is a place with robust opportunity if you want to go out and look for it and find it. Now the people ripping up the streets today and last night, the Antifa types, … they disagree with the whole construct of America.

CHARLAMAGNE: I gotta push back on you with that too though. It’s not just the Antifa types. You know what I’m saying? Like you see all these white folks out there protesting, looting, raising hell. Let’s not act like there isn’t 40 million people who have filed for unemployment in America. Folks have been sitting around for the last three months waiting on stimulus checks.

More than 44 percent of those people have been denied unemployment checks, are still waiting on them to come. People of all races are broke. They don’t know where their next meal is coming from. Their savings are exhausted if they had any. They don’t know how they’re going to pay a bill, so of course they’re going to go out there and loot. Of course they’re angry and frustrated.

LIMBAUGH: Unnecessarily it turns out, unnecessarily. There’s no reason to shut down the country. … Of course you put 40 million people out of work and tell them—you penalize them when they do try to open their businesses, you’re going to create a powder keg. A powder keg has been created.

CHARLAMAGNE: That’s why I can’t allow you to say that it’s just Antifa out there, because it is a lot of white people who are fed up with this country and –

LIMBAUGH: Look, the Antifa people are the violent ones. The Antifa people are the ones that are trying to capitalize on it. Of course, there’s some legitimate heartfelt people out there peacefully protesting, but look you guys, let me tell you. You are a testament to the opportunity available in America. Look at you. How did you do it? What did you have to overcome to become The Breakfast Club? What did you have to overcome to become dominant in morning drive in American radio? Who held you back, or what were you able to overcome in order to do it? The opportunity is there is the only thing I’m saying.

Co-host DJ Envy drew a comparison between the criticism that former 49ers NFL player Colin Kaepernick received for peacefully protesting by taking a knee during the National Anthem before the game and the violent behavior of protesters.

DJ ENVY: Right, but you talk about peacefully protest, right? And you were very opinionated about Colin Kaepernick, and he was peacefully protesting, right? And now, people are saying, no, they’re not peacefully protesting. This is the same thing Colin Kaepernick was kneeling for that the world was so upset about, and the world said he’s taking it too far, and he doesn’t know what he’s talking about. This is exactly the reason why he was kneeling and protesting, the fact that an unarmed African-American man was doing nothing. They still don’t even know if he had a fake $10  bill or not, and that man kneeled on George Floyd for damn near nine minutes and killed that man, murdered that man, and looked at us like, ‘Yeah, I’m doing it, and what?’

LIMBAUGH: You guys I’m trying to tell you I’m all with you. I’m 1,000 percent with you, and this is why I wanted to talk to you, because I know that there are, you know, we all have preconceptions that we live under and biases that we live under, and I wanted to reach out to you guys specifically. You were the ones that I was told to speak to, that this is intolerable.

LIMBAUGH: When did I say that?

CHARLAMAGNE: You said you know you guys made it, y’all are successful, but the rest of us are catching hell out here. RIP George Floyd, but we can explain this as an isolated incident for black people.

Limbaugh asked whether former San Francisco 49 Colin Kaepernick was signed to an NFL team whether that would stop the riots.

LIMBAUGH: Charlamagne, you’re adding things to my mouth that I didn’t say. You’re adding syllables I have not uttered. I was trying to be complimentary of you, and I’m trying to illustrate that you are an example to others that want to try, you can succeed. Let me ask you a question. If the Minnesota Vikings had announced two nights ago that they’re going to hire Colin Kaepernick, would the riots have stopped?

CHARLAMAGNE: No, nobody gives a s*** about that.

DJ ENVY: The reason I brought him up is because you were so opinionated about him protesting.

LIMBAUGH: You brought up Colin, and I’m just asking, if the Vikings had signed him, would the people have said, ‘Oh, good. He’s got a gig. We’re not going to protest anymore.’

CHARLAMAGNE: No, because that’s not going to stop white supremacy. That’s not going to stop racism. RIP to George Floyd, but that was not an isolated incident. This a regular occurrence for black people in this country. The powers that be don’t want to change the system. … I want to know how you’re going to use your privilege as a white male to combat this prejudice. You got a direct line to Donald Trump.

LIMBAUGH: I don’t buy into the notion of white privilege. See I think that’s a liberal political construct right along the lines of political correctness that’s designed to intimidate and get people to shut up and admit they’re guilty of doing things they haven’t done. I don’t have any white privilege.