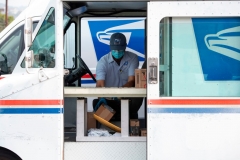 (CNSNews.com) - A rural mail carrier in West Virginia has been charged with attempting to defraud West Virginians of a fair election by allegedly manipulating absentee voter requests.

Thomas Cooper was responsible for delivering mail in three West Virginia towns - Onego, Riverton and Franklin - the towns from which the tampered ballot requests were mailed, according to the West Virginia attorney general’s office.

“Manipulating one’s absentee ballot or application is not a laughing matter – it’s a federal offense,” Attorney General Patrick Morrisey said in a statement. “We must protect the integrity of the ballot box, and this demonstrates the aggressive action we will take to do so. It is more important now than ever for voters to watch for unexplained or suspicious marks and/or any other irregularity with their ballot. If something looks suspicious, let us know right away.”

According to the criminal complaint, the alleged offense took place in April.

According to an affidavit by an investigator with the attorney general’s office, eight mail-in absentee request forms were altered, changing the voters’ party affiliation from Democrat to Republican:

“In April 2020, the Clerk of Pendleton County. West Virginia. received, via U.S. mail, eight ‘2020 Primary Election COVID-1 9 Mail-In Absentee Request’ forms from eight voters on which the voter’s party-ballot request appeared to have been altered by use of a black-ink pen.

On five requests, it appeared that the voters ballot choice was changed from Democrat to Republican) The Clerk knew that some of the voters were not Republican, so she called them.

One of the voters was M. R.. who said that all four members of his family requested a Democrat ballot by placing a blue-ink line under the word “Democrat,” and they did not use black ink and they did not request a Republican ballot. His daughter, P. R., is the Onego Post Master, and she personally placed all four of the Rs’ requests in the mail at her post office on April 9, 2020. Knowing this, M. R. suggested that a mail carrier might have tampered with their requests.

The Clerk contacted the West Virginia Secretary of State's Office to report that requests had been altered, and I was given the assignment of investigating the case. I interviewed the Clerk and collected the eight requests. On the R’s four requests, the word “RepubIican” was circled in black ink in such a way as to also mark-out a blue-ink line under the word “Democrat” and the box beside the word “Republican” was also checked in black ink. Here, for example, is the relevant part of M. R’s request (please note that the yellow highlight was placed on the request by the Clerk):

Two requests were from M. G. and K. G., of Franklin. WV. On K. G.’s requesi under the heading “I’m registered as.” a blue-ink circle around the word “Democrat” was scratched out with black ink, and black ink was used to circle the word “Republican” and check the “Republican” box.

Cooper was interviewed at the end of April and admitted to changing the absentee ballot requests:

On April 27, 2020, Inspector Phillips and I met with Thomas Cooper, who agreed to an audio recording interview. During the interview, Cooper said that “yes” he changed the requests that had been placed in the mail at the Onega post office (i.e., the R’s requests). As for the other requests, Cooper said, ‘I’m not saying no. .,[but] if it was on my route, I would take the blame.” The investigator asked, “You were just being silly?” and Cooper responded, “Yeah,.. [I did it] as a joke.. [I] don’t even know them.

“Had Cooper’s conduct not been detected, it would have caused the Clerk to give Republican ballots to 5 Democrat voters—skewing the primary election by 5 votes and thereby defrauding all West Virginian’s of a fair election,” the investigator concluded.

Trump has spoken out against mail-in voting, saying it is vulnerable to corruption.

During a White House Rose Garden press conference on Tuesday, the president said, “When you do all mail-in voting ballots, you're asking for fraud. People steal them out of mailboxes. People print them and then they sign them and they give them in, and people don't even know, and they are double counted.

“They force people to vote. They harvest. You know what harvesting is? They take many, many ballots and put them together and then they dump them and nobody has any idea whether they are crooked or not,” the president said.

“You do mail-in voting, it's another thing to do absentee voting or if somebody has a medical condition where they go through a process, and they get an absentee ballot. That's okay. That's different, but in California, the governor is sending millions of ballots all over the state, millions, to anybody, to anybody - people that aren't citizens, Illegals. Anybody that walks in California is going to get a ballot. We are not going to destroy this country by allowing things like that to happen,” he said.