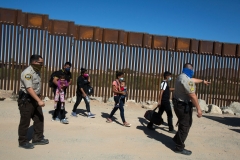 Migrants from Guatemala are escorted by US Border Patrol agents after they turned themselves over to authorities at the US-Mexico border May 12, 2021 in Yuma, Arizona. (Photo by RINGO CHIU/AFP via Getty Images)

(CNSNews.com) – Maryland Gov. Larry Hogan announced Wednesday that he has vetoed a bill that would make Maryland a sanctuary state.

“Local law enforcement should fully cooperate with federal law enforcement—a principle I have consistently upheld throughout three federal administrations led by presidents from both political parties. Flawed legislation such as this sets a dangerous precedent regarding the state’s commitment to upholding the law and ensuring the safety of our citizens,” Hogan said in the petition.

“As governor, I believe in creating an inclusive and diverse Maryland, which is why our administration has consistently welcomed refugees who the federal government has determined are properly and legally seeking refugee status and have been adequately vetted. By promoting diversity and inclusion for all while upholding our commitment to public safety, Maryland’s approach is consistent with both our laws and our values,” he said.

The summary of the bill states: