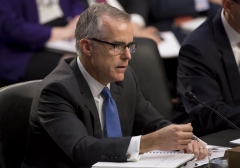 (CNSNews.com) – Former FBI Deputy Director Andrew McCabe told CNN’s “The Situation Room with Wolf Blitzer” on Monday that one way to address the problem of violent crime in cities like New York City is “on the prosecution side of the issue.”

When asked whether New York City Mayor Eric Adams’s blueprint will get to the root of the problem, McCabe said, “Well, that remains to be seen, Wolf. We haven't heard all of the details on how this new plainclothes team will be different than the old anti-crime units that ran into so much trouble and were so divisive in the communities they served in years ago.

“So I think we really need to hear more from the mayor on that count, but I will say that another way to address this problem is on the prosecution side of the issue. When criminals know without a doubt that getting caught with a gun is going to result in serious time in jail; they're not going to get bonded out; they’re not going to get pled down; they stop carrying those weapons, so that's something they need to look at as well,” he said.

When asked what goes through his mind seeing the level of violence right now that police officers go through in major U.S. cities, former D.C. Police Chief Charles Ramsey said, “Well, it's ridiculous, and It's not just the police officers. It's members of the general public. I mean crime has been increasing for the past couple of years and this year, even though it's early in the year, it doesn't look like it's going to get any better, and so I understand what the mayor is doing.

“I agree with him. You have to get these illegal guns and the people who use them off the streets, period. There's no other way to do this. It is not going to fix itself, and police officers obviously are going to be at risk, because they're the ones that go after the people doing the shootings, doing the carjackings and so forth, and it's just not a good situation at all right now,” he said.

Ramsey, who is also a former Philadelphia police commissioner, agreed with McCabe that criminals don’t fear being arrested, because they’re not jailed or held before their court hearing.

“Right now, there is in many of our cities, including the one in I'm in now, Philadelphia, they don't fear being arrested, because they know nothing's going to happen to them. They're not going to be given any kind of jail sentence. They're not going to be held pending their court hearing. You're starting to see more and more of these guys out on the street,” he said.

“They're violent. They either wind up hurting someone or because the street is really merciless, they will be the ones that will be the next victim themselves, because they'll be shot by some other bad guy. So all of it just leads to bloodshed and violence on the streets of our city,” Ramsey said.

“So not only do the police have to be aggressive in locking some of these guys up, the prosecution has to step up to the plate and of course have to step up and do something as well. Otherwise, this is not going to change,” he said.