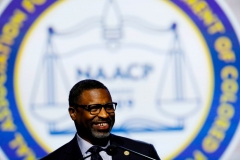 Derrick Johnson, president and CEO of the NAACP addresses the NAACP's (National Association for the Advancement of Colored People) 110th National Convention at Cobo Center in Detroit, Michigan on July 22, 2019. (Photo by JEFF KOWALSKY/AFP via Getty Images)

(CNSNews.com) – NAACP President and CEO Derrick Johnson told CBS’s “Face the Nation” on Sunday that for African Americans, the Kyle Rittenhouse trial “is a warning shot that vigilante justice is allowed in this country or in particular communities.”

“You know, it's hard for African Americans to reconcile what we witnessed in that trial. We have far too many individuals sitting in jail for crimes they didn't commit or overcharged for crimes that were committed,” Johnson said.

“Here you have a 17-year-old who illegally purchased a gun, traveled across state lines to protect property that was not his, for owners who did not invite him, and he put himself in harm's way based on the rhetoric that he's seen on social media platforms,” he said.

“So, it's hard to reconcile the verdict with the experience that many African Americans have faced over several decades. So, this trial for us is a warning shot that vigilante justice is allowed in this country or in particular communities,” Johnson added.

The NAACP president said that “the current political environment has allowed for this type of behavior.”

“The prior administration has opened the door, and many individuals who operate under the banner of white supremacy have run through the door, whether it's Charlottesville or the killings in Pittsburgh at the synagogue, or in Lewisville, and unfortunately, until we have mature politicians willing to stand up, regardless of political affiliations, and address the question of mob violence, vigilantism, but more importantly, the underlying issue of race in this country- something we have never truly addressed,” he said.

Host Margaret Brennan pointed out that there’s no evidence of Rittenhouse being a white supremacist, to which Johnson replied: “Well, it's not about the evidence of him being a white supremacist. It is about the position that individuals like him find themselves in, where they think they have to go to protect property because of a peaceful protest, in some cases Black Lives Matter organizing.

“Black Lives Matter is a value proposition. it's not an organization in one sense, it's not about a hashtag. It's a value proposition that the lives of African Americans have been diminished and our lives matter, and when you have scenarios like what took place in Wisconsin that caused people to stand up with this police officer who paralyzed another innocent individual, you have to begin to ask- we have to ask ourselves the questions,” he said.

“Do we value the lives of not only African Americans, but everyone? And what- what he did was take up the mantle, because the political climate allowed for him to do that. We had a white supremacist in the White House, and it opened the door to this floodgate of vigilante violence, and that's the real question here,” Johnson said.