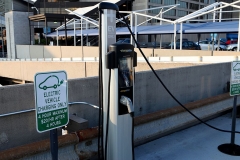 A car sits charging at an Electric Vehicle Charging Station on July 17, 2015 in Atlanta, Georgia. (Photo By Raymond Boyd/Getty Images)

(CNSNews.com) – President Joe Biden announced Thursday that the U.S. is committed to reducing greenhouse gas emissions by half by the year 2030.

Biden plans to do so in part by increasing five-fold the number of electric charging stations for electric vehicles throughout the nation.

“I see autoworkers building the next generation of electric vehicles, and electricians installing nationwide for 500,000 charging stations along our highways,” the president said at the Virtual Leaders Summit on Climate.

The U.S. passed the milestone of 100,000 public chargers in March, the White House said Thursday.

The president’s infrastructure bill – the $2 trillion American Jobs Plan - calls for building a network of 500,000 charging stations, “using a combination of grant and incentive programs for state and local governments and the private sector.”

“It will support a transformational acceleration in deployment of a mix of chargers in apartment buildings, in public parking, throughout communities, and as a robust fast charging along our nation’s roadways.”

The plan is to make driving electric vehicles convenient in every part of the country.

Special Presidential Envoy for Climate John Kerry noted that automakers GM and Ford have already committed to increasing its offering of electric cars.

“There’s a company called Tesla, which is the highest valued automobile company in the world. Why? All it makes is one product – electric vehicles. That is what is happening. That’s a signal. That’s the market saying here we are. This is going to happen, and GM has now already announced on its own that they are only going to produce electric vehicles as of 2035, and Ford Motor Company,” Kerry said.

“Ask the president of Ford. I heard him at an event standing up and saying, the electric car is a better car. They love it, and now that you’ve driven one but they’re fabulous. They’re really great, and so my feeling is that this is going to take place because the market is sending signals and the consumer is sending signals,” he said.

When asked Thursday why taxpayers should pay for 500,000 electric charging stations if the auto industry is already moving towards electric vehicles, White House Press Secretary Jen Psaki said, “I think there’s a role for government to play … to incentivize, to ensure that there is continued movement in this direction, but there’s also a great deal – a lot of the investment that’s in the American Jobs Plan is about ensuring that there are industries and jobs that are created in sectors in the future to help the next generation survive and prosper.

“So yes, there is a private sector partnership here. There is the role of the private sector, but our view is there’s also a role of the public sector and that these are industries that are also going to create jobs, and that’s part of the role we can play,” the press secretary said.

“I know there’s been criticism out there or questions about how this is going to impact job creation today and job creation in our economy today or some criticism I should say from some Republicans in Congress that I’ve read this morning, seen on Twitter, but the president is somebody who has created --- will be the first in history to create a million jobs in his first 100 days in office,” she said.

“He’s on track for that in our view, and a lot of these critics are the same people who advocated for the policies of the last administration, and the last president who oversaw an economy that lost more jobs than any president since … Herbert Hoover. … So join us on the journey. We feel clean jobs can be good jobs, can create millions of jobs in the future, and that’s I think what we’re conveying to the American public,” Psaki said.