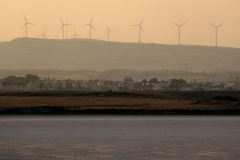 This picture taken on August 30, 2021 shows a view of the Laranca salt lake near Cyprus' southern coastal city of the same name, and the windmills of the nearby Alexigros wind farm. (Photo by AMIR MAKAR/AFP via Getty Images)

(CNSNews.com) – Rep. Steve Scalise (R-La.) said Tuesday that the Democrats’ attempts to do away with fossil fuels will hurt people recovering from Hurricane Ida and similar natural disasters, because hospitals can’t operate on windmills and solar power.

“We've talked about infrastructure for a long time. President Trump wanted an infrastructure bill, and by that I mean what everybody used to always consider infrastructure: roads, bridges, ports, water ways, even broadband. Where they've gone on the left is now to try to redefine infrastructure to include fossil fuel, green new deal type proposals, to do tax and spending,” Scalise told Fox Business’s “Mornings with Maria Bartiromo.”

"Speaker Pelosi’s tied this bill to a 3 1/2 trillion-dollar tax and spend bonanza for the left. It would wreck our economy, increase inflation and by the way, make it harder to get fossil fuels. Here on the ground in New Orleans area, people that are decimated from Hurricane Ida, the biggest two needs from the Republican and Democrat leaders alike are power and gasoline, and both come from fossil fuels,” he said.

“Our power grid’s generated by natural gas. No hospital after the storm was running on windmills and solar panels. I’m all for renewables, but they don't do the job for what we need in base load capacity, and their bill, their Green New Deal agenda goes against fossil fuels and helps Russia, helps Middle Eastern countries, helps OPEC at our expense, and by the way, their bill increases global carbon emissions, which I thought was their whole religion of global warning,” the congressman said.

Scalise said that “if something goes wrong” and Democrats want to go to a hospital, they want to make sure that that hospital has electricity, and where does it come from right now?”

“If they get rid of all of that stuff, it’s not like it just goes away. President Biden just a few weeks ago was begging OPEC and Russia to produce more oil because gas prices are so high already, from his radical agenda, so you know look,” the congressman said.

“This stuff has never worked, but if you send those jobs and that work to foreign countries, China, India, they’d be happy to refine our oil and our gasoline. Russia and OPEC would love to produce more if we're not doing it. The thing is we have better standards here in America. They emit more carbon to make that same fossil fuel energy in other countries,” Scalise said.

“Why wouldn't you want to make more here? We are reducing carbon emissions, because we do things. They love beating up on America. Yet America has the highest standards in the world,” the congressman said.