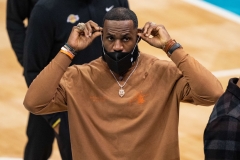 LeBron James of the Los Angeles Lakers on the bench during their game against the Charlotte Hornets at Spectrum Center on April 13, 2021 in Charlotte, North Carolina. (Photo by Jacob Kupferman/Getty Images)

(CNSNews.com) – NBA basketball star LeBron James is facing backlash for tweeting a picture of the Columbus, Ohio, police officer who shot and killed a 16-year-old girl to prevent her from stabbing someone.

Sen. John Kennedy (R-La.) told Fox News’s “The Faulkner Focus” on Thursday that he’s glad that James took the tweet down, but the NBA player should have made sure he had all the facts.

“Well, first I think Mr. James did the right thing by pulling down the tweet. Look, Harris, I admire his passion. He’s clearly a leader for many Americans for a variety of reasons, not the least of which is his extraordinary physical skills,” Kennedy said.

“I think sometimes Mr. James has more zeal than wisdom. He doesn't wait on the facts. I mean, he can go from zero to screw everyone pretty fast, and I wish I was as sure of anything as Mr. James sometimes seems to be sure of everything. I don't want to be overly critical, but on a situation like this, you have to get the facts, and what happened in Columbus was horrible,” the senator said.

“I mean a cop had to choose between two lives in a split second, and I know some have said—President Biden when he was running said, well, the cop ought to shoot the gun, the knife out of their hands. This isn't Silverado or Deadwood. This isn't the movies. Cops sometimes have to make quick decisions, and we have to wait for the facts and investigation,” he said.

“Look, I wish he hadn't tweeted it out. I suspect he does, too, and he did the right thing by pulling it down, and I mean it. I admire his passion, but you’ve got to balance your zeal with wisdom, and if you’re in a leadership position, you can't just shoot from the hip,” Kennedy said.

“Now and we have to disabuse this -- people of this idea, which I don't think Americans share, that every cop, many of whom are racial minorities, every cop gets up every morning and goes to work hoping for the opportunity to hurt somebody, including but not limited to a racial minority,” the senator said.

“I don't think that's true. I just don't. I don't think most cops are racist. Some probably are, and we need to weed them out, but if you hate cops just because they're cops, you’re being unfair and unrealistic, and you aren't fooling the American people. They don't believe that,” he said.

Host Harris Faulkner pointed out that the White House characterized the shooting as racially motivated.

“She was a child. We're thinking of her friends and family and the communities that are hurting and grieving her loss. Police violence disproportionately impacts black and Latino communities. They experience higher rates of police violence. Our focus is on working to address systemic racism,” White House Press Secretary Jen Psaki told reporters on Wednesday.

Kennedy said that President Joe Biden has “gone full wokerista” and joined people “who believe that America was wicked in its origins and that the American people are even more wicked today, that we have millions of Americans who are racist and misogynistic and ignorant, especially if they didn't vote for him.”

Meanwhile, the National Fraternal Order of Police blasted James for his deleted tweet, saying that James “with his vast resources & influence, should educate himself and, frankly, has a responsibility to do so, on the facts before weighing in. This is disgraceful & extremely reckless. The officer saved a young girl's life. No amount of gaslighting will change that fact.”