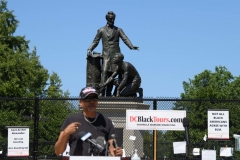 The Emancipation Memorial stands behind US conservative author Mason Weaver as he speaks during a rally to protect the monument in Washington, DC, on July 14, 2020. (Photo by NICHOLAS KAMM/AFP via Getty Images)

(CNSNews.com) - Lincoln Park - the Capitol Hill park in Washington, D.C., which houses the Emancipation Statue - should be the site of President Donald Trump’s proposed National Garden, Star Parker, founder and president of the Center for Urban Renewal and Education (CURE) proposed on Tuesday.

Speaking at a rally in support of the Emancipation Statue, which depicts former President Abraham Lincoln with a freed slave, Parker said the statue is too important to “be hidden away in a museum just to appease a mob or the insecure that thinks they need safe space.”

“This country was founded on the rule of law, and if statues should come down, then it is up to the local governments and local city councils and local mayors to make that determination, but when we’re talking about statues that are on national federal property, we’re talking about debate for all of the American people, debate that we must have if there’s going to be movement to remove this precious, precious, sacred monument that I stand in front of,” she said.

“The debate now surrounding this Emancipation Statue that stands here in Lincoln Park is a critical discussion that I believe all Americans of goodwill and those who want racial harmony should engage,” Parker said.

“The memorial shows a standing President Lincoln with the Emancipation Proclamation in his right hand and Archer Alexander, the last slave captured under the Fugitive Slave Act at his left and in a position that has created historical debate since the statue was erected in 1876,” she said.

“Those today who are overturning and removing statues have entered this debate, but not to participate in the critical discussions that art is meant to provoke, but they want to remove history that they don’t like,” Parker added.

She said that the statue depicts the slave as trying to get up, not kneeling.

“The dismantlers tell us that this portrait is of white supremacy, the white president - he who holds the power standing before a subservient black slave kneeling before him. Contrary to claims of these dismantlers, many in the historical debate contest that Archer Alexander, the freed slave, is not kneeling but is getting up to embrace his freedom,” Parker said.

“The story of Archer Alexander is a remarkable story being sold from one master to the next all the while with his heart and his soul towards freedom - exactly what is being depicted in this monument. This Archer Alexander Memorial is too important in American history to be hidden away in a museum just to appease a mob or the insecure that thinks they need safe space,” she said.

“This Emancipation Memorial also known as the Freedman’s Memorial was paid for by funds raised entirely by former slaves as they wanted to honor President Lincoln. Now D.C. Delegate Eleanor Norton Holmes is pushing to remove this Emancipation Statue, because she says that the statue fails to note in any way how enslaved African-Americans pushed to their own emancipation, but this memorial depicts that exact reality,” Parker said.

“We at Urban Cure propose that President Trump selects this location in Lincoln Park to be the home of his new national garden and that the park be renamed Unity Park to not only capture the theme of American heroism that illuminates all ethnicities in our nation but also to shine a light on our one set of principles and on our one God,” Parker said.

As CNSNews.com previously reported, President Trump issued an executive order on July 3 to establish a “National Garden of American Heroes” as well as the establishment of an “Interagency Task Force for Building and Rebuilding monuments to American Heroes.