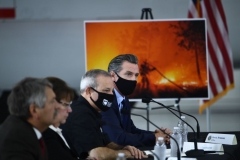 (CNSNews.com) – While he acknowledged that the state has not done all it could on forest management, California Gov. Gavin Newsom took an opportunity during his briefing with President Donald Trump and other state officials to urge the president to consider the effects of climate change on the recent wildfires that have plagued the state.

Trump blames the wildfires that have plagued California on poor forest management.

“We can agree to disagree, and I appreciate your frame on the politics of this, but let me acknowledge two things briefly, and I’ll turn it back to you. There’s no question when you look past this decade and looking past almost 1,000 plus years, that we have not done justice on our forest management. I don't think anyone disputes that,” Newsom said.

“The state of California and your administration entered a first type of a commitment over the next 20 years to double our vegetation management and forest management. I want to thank you for supporting that effort, funding that effort. We acknowledge our role and responsibility to do more in that space, but one thing is fundamental: 57% of the land in this state is federal forest land. Three percent is California, so we really do need that support,” he said.

“We need that emphasis of engagement, and we are fully committed to working with you to advance that cause, and final point, I’d be negligent – now this is not – and we’ve known each other too long and as you suggest, the working relationship, I value. We obviously feel very strongly that the hots are getting hotter, the dries are getting drier,” the governor said.

“We are having heat domes the likes of which we’ve never seen in our history, the hottest August ever in the history of this state, the ferocity of these fires, the drought 5-plus years, losing 163 million trees to that drought,” he said.

“Something’s happened to the plumbing of the world, and we come from a perspective humbly where we submit the science is in and observed evidence. It’s self-evident that climate change is real, and that is exacerbating this, so I think there is an area of at least commonality on vegetation forest management, but please respect - and I know you do - the difference of opinion out here as it relates to this fundamental issue on the issue of climate change,” Newsom said.

Wade Crowfoot, secretary of the California Natural Resources Agency, then took Trump to task over climate change, saying it’s important for the president to acknowledge the role of “changing climate” and recognize “the science.”

CROWFOOT:  Yeah, well, from our perspective, there is amazing partnership on the ground, and there needs to be.  As the governor said, we've had temperatures explode this summer. You may have learned that we broke a world record in the Death Valley: 130 degrees, but even in Greater LA: 120-plus degrees, and we're seeing this warming trend make our summers warmer, but also our winters warmer as well.

So I think one area of mutual agreement and priority is vegetation management, but I think we want to work with you to really recognize the changing climate and what it means to our forests, and actually work together with that science. That science is going to be key, because if we -- if we ignore that science and sort of put our head in the sand, and think it's all about vegetation management. We're not going to succeed together protecting Californians.

CROWFOOT:  I wish science agreed with you.