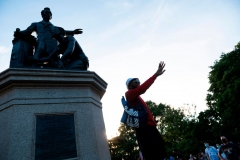 A protest leader speaks during a small rally in support for the removal of the Emancipation Statue at Lincoln Park in Washington, DC on June 23, 2020. - As the wave of anti-racism protests rocking the United States brings down monuments to figures linked to the country's history of slavery, the spotlight is shifting to other prominent people long considered untouchable. (Photo by ROBERTO SCHMIDT/AFP via Getty Images)

(CNSNews.com) – Turning Point USA Spokesman Rob Smith told “Fox & Friends” on Thursday that a lot of the rioters tearing down statues don’t even know the historical context of the statues they’re tearing down.

Smith said the right way to address the issue of taking down statues is by voicing concerns through local government, not just tearing down statues on their own. He noted that the rioters are also hurting people in the process.

“I do understand that there is a legitimate conversation to be had about the historical context of some of these statues, but I also understand this is America. We do not solve problems via mob rule. What we do is we actually bring up the legitimate concerns. We make sure that this is something that happens via local government,” he said.

“We don't just tear statues down, and I have to say that when you look at some of the stuff that is going on around the tearing down of some of these statues. Number one, these situations end up being completely violent from time to time. You see what happened to that state senator … from Wisconsin last night, and you see what happened with one of the issues where somebody pulled the statue down, and a man got his head split wide open,” Smith said.

Smith noted the two statues of abolitionists were targeted in Philadelphia and in Madison, Wis.

“I don’t know if you saw the social media video. It’s absolutely horrifying, so there’s a lot of violence that happens around here as well, and I have to say that a lot of these people that are tearing down some of these monuments and defacing them do not even know the historical context of what they are taking down. Matthias Baldwin in Philly, that statue was debased and defaced. That man was abolitionist,” he said.

“Hans Christian Heg over there in Madison, Wisconsin, that was abolitionist as well who died fighting slavery, so these people don't even know the historical context of what they're trying to tear down. They are just trying to tear down and destroy, and we don't do mob rule in America,” Smith said.

According to the Philadelphia Inquirer, the Baldwin statue was actually defaced during the weekend of May 30. George Floyd died on May 25 while in police custody.

We can confirm that the statue of Matthias Baldwin, along with other statues in the area of Philadelphia’s City Hall, was tagged with paint and graffiti at some point during the first days of protests that took place in Philadelphia,” a spokesperson for Mayor Jim Kenney’s office said. “There has been no subsequent vandalism of the Baldwin statue in recent days. So, while the Baldwin statue was in fact defaced, it did not take place yesterday as the tweet and accompanying image claim.”

“Baldwin, who created one of the largest a locomotive manufacturing firms of his time, was an outspoken critic against slavery during the early 1800s, arguing for the right of African Americans to vote and founding a school in the city for black children. Baldwin’s statue was erected in 1906, and placed in its current spot outside City Hall in 1936,” the Inquirer reported in an article published on June 12.

Col. Hans Christian Heg “fought for the Union during the Civil War and was a stark opponent of slavery during that time.” His statue was torn down and thrown into Lake Monona this week, WKOW, a Wisconsin ABC-TV affiliate reported.

Fox News’ Steve Doocy noted that protesters’ next target is an Abraham Lincoln statue showing the former president standing over a kneeling slave. The statue is located in a space between the U.S. Capitol and RFK Stadium in Washington, D.C. Protesters plan to target that statue on Thursday night.

“They say the imagery there is terrible and they want it down. They say they are going to come after it tonight and tear it down at 7:00. Obviously that's the wrong thing and why the president is calling out the National Guard and U.S. Marshals. If you have a problem with something in town square that's not how you deal with it?” Doocy asked.

“So it's not going to be a situation where we have armed National Guard troops that are there to quell any kind of uprising there, but we do have to protect these monuments. We have to protect American history. Like I said before, if there is an issue with historical context of some things, talk about it as Americans,” he said.