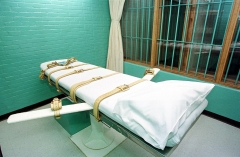 (CNS News) -- Attorney General William P. Barr ordered the Federal Bureau of Prisons (BOP) to schedule the executions by lethal injection of four federal prisoners who were convicted of murdering children and, "in two cases, raped the children they murdered," said the Department of Justice on Monday, June 15.

Last year, Barr directed the BOP to revise the Federal Execution Protocol to use the drug pentobarbital for executions. This protocol is followed in state executions and has been upheld by federal courts and the Supreme Court, said the DOJ.  The order was delayed by a district court injunction but that has been lifted, "clearing the way for the federal government to resume capital punishment after a nearly two decade hiatus," said the DOJ.

“The American people, acting through Congress and presidents of both political parties, have long instructed that defendants convicted of the most heinous crimes should be subject to a sentence of death,” said Attorney General Barr.

“The four murderers whose executions are scheduled today have received full and fair proceedings under our Constitution and laws," he said. "We owe it to the victims of these horrific crimes, and to the families left behind, to carry forward the sentence imposed by our justice system.”

Describing the four men now scheduled for execution in July and August, the DOJ said,

Each one of the four killers has exhausted all legal remedies and will be executed in the U.S. Penitentiary Terre Haute, Indiana.