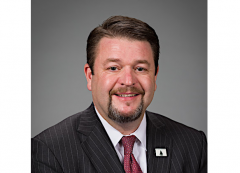 Rapert has said his bill will "mirror" the Texas law, which went into effect on Sept. 1.

The heartbeat legislation basically says that abortions are prohibited after the unborn baby's heartbeat is detected through an ultrasound. This usually occurs about 6 weeks into a pregnancy. Exceptions are allowed in cases where the mother's life is threatened.

The legislation also orders that private individuals may file lawsuits against any person who performs or assists in the abortion. The mother cannot be charged, only those who make the abortion possible.

On Sept. 2, Rapert tweeted, "As the original sponsor of the first #HeartbeatBill to pass in America in 2013, today I have ordered a bill be filed in Arkansas to update our law to mirror the Texas SB8 bill which was just passed as a Model Bill at@ChristLawmakers & upheld by the US Supreme Court."

When the Texas law went into effect in September, Rep. Rapert said, “What Texas has done is absolutely awesome.”

On Oct. 18, Rapert tweeted, "Arkansas was recently named the most Pro-Life state in the nation. It should be easy to pass the Texas-style heartbeat bill in our upcoming Special Session."

Emily Wales, the CEO of Planned Parenthood Great Plains, told HuffPost, “The overwhelming majority of Arkansans would lose access to care. ... The reality of what this means for the region is very, very real and present. It would only increase that crisis to Arkansans who would then be forced to travel, if they can afford to, to states even farther out ― potentially overwhelming the neighboring states that are trying to support Texans.”

Americans United for Life named Arkansas the "Most Pro-Life State" for 2021.

"Arkansas is number one because of the truly impressive example that is being set in Little Rock," said Catherine Glenn Foster, president & CEO of Americans United for Life, in December 2020.

"In 2019, Arkansas passed a whopping 10 pro-life laws and several of these were enjoined. But this summer, after the U.S. Supreme Court’s ruling in June Medical Services, these laws were allowed to go into effect," she added.