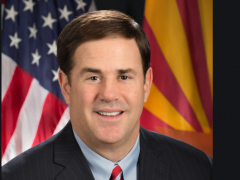 (CNS News) -- Arizona's Republican governor, Doug Ducey, signed a bill into law on Tuesday that outlaws the abortion of unborn babies that have genetic abnormalities, such as Down syndrome, and abortion based on sex or race of the child. Exceptions apply when the child has a lethal fetal condition or when the mother's life or health is at risk, said the governor's office.

“There’s immeasurable value in every single life — regardless of genetic makeup,” said Governor Ducey in a press release. “We will continue to prioritize protecting life in our preborn children, and this legislation goes a long way in protecting real human lives. My sincere thanks to Senator Nancy Barto for her leadership and work on this life-saving issue.”

A boy with Down syndrome plays soccer. (Getty Images)

“We need to protect our most vulnerable, especially those with treatable genetic conditions,” said Senator Nancy Barto (R). “They are loved, integral members of our community that make Arizona whole — and I’m proud to sponsor legislation that gives them a voice before they’re even born. Thank you, Governor Ducey, for signing Senate Bill 1457.”

Actor John C. McGinley signs autographs after reading for children with Down Syndrome at Barnes & Noble at The Grove at Farmers Market on February 27, 2007 in Los Angeles, California. (Photo by Chad Buchanan/Getty Images)

The law also states that an unborn child, from the moment of conception -- "at every stage of development" -- has the same rights, privileges, and immunities available to other persons, citizens, and residents of the state of Arizona, as set forth in the U.S. Constitution.

Further, the law prohibits any public funds being used by state universities or community colleges for human cloning or research involving fetal remains from an abortion.

"With this legislation, Arizona remains among the top pro-life states in the nation," said the governor's office.  "Governor Ducey's action on SB 1457 comes days after he signed SB 1254, which ensures women have easy access to information about adoption and resources that are available to assist them during pregnancy."

The Arizona Catholic Conference said, "SB 1457 continues Arizona's legacy as the most pro-life state in the country and establishes that Arizona's laws will be interpreted in the context of valuing all human life. This legislation looks forward to the day that Roe v. Wade is overturned and shows concern for both unborn children and their mothers."

"More immediately, SB 1457 prohibits public educational institutions from performing abortions, calls for the cremation or burial of aborted babies, forbids abortions on the basis of genetic abnormalities like Down Syndrome, and clarifies that abortion-inducing drugs may not be sent through the mail," said the Arizona Catholic Conference.

Ruth Harlow, a senior staff attorney at the ACLU Reproductive Freedom Project, said, "SB 1457 is a blatant attempt to push abortion care out of reach under the guise of protecting people with disabilities."

"Let’s be clear," said Harlow, "this bill does nothing to address the ableism or discrimination that people with disabilities face in health care, education, and housing. Instead, it only exploits the struggle for disability rights in a shameful attempt to further these lawmakers own anti-abortion agenda and increases barriers to essential health care."

"It's a deeply disappointing day for Arizonans," said Murphy Bannerman, with Planned Parenthood Advocates of Arizona.  "This is something that will criminalize doctors in our state and likely push many doctors to leave our state for fear of this law."