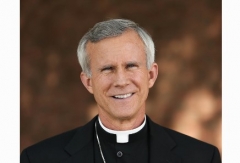 (CNS News) -- Catholic Bishop Joseph Strickland, who heads the Diocese of Tyler, Texas, endorsed a video message by Rev. James Altman, who said that Catholics cannot be Democrats and that such "pretenders" must "repent" of their support for the party and its platform or they will "face the fires of Hell."

"As the Bishop of Tyler I endorse Fr Altman’s statement in this video," said Bishop Strickland in a Sept. 5 tweet.  "My shame is that it has taken me so long. Thank you Fr Altman for your COURAGE. If you love Jesus & His Church & this nation...pleases HEED THIS MESSAGE."

In the 10-minute message posted on YouTube, Fr. Altman, pastor of St. James the Less Catholic Church in LaCrosse, Wisc., explains that the church is not a political power but is a "moral power," in the words of emeritus Pope Benedict XVI. And because "politics fundamentally should be a moral enterprise," the church "has something to say about politics."

Therefore, when politics and politicians act in immoral ways, we have a duty to speak up about it, says Fr. Altman.

"Here's a memo to clueless, baptized Catholics out there: You cannot be Catholic and a Democrat," says Fr. Altman. "Their party platform is absolutely against everything the Catholic Church teaches."

"So quit pretending that you're Catholic and vote Democrat," he continues. "Repent of your support of that party and its platform or face the fires of Hell."

Fr. Altman then discusses the pro-abortion policy of the Democrat Party, a policy that supports abortion across the board, up until the moment of birth.

"There will be 60 million aborted babies standing at the gates of Heaven, barring Democrats entrance," he says in the video, "and nothing you can say will ever excuse you for your direct or indirect support of that diabolical agenda."

"There are a lot of pretenders, a lot of imposters, a lot of people masquerading as Catholics -- laity and clergy alike -- but there were zero faithful Catholics who voted for that godless politician [Barack Obama] who had the audacity to blaspheme and say God bless Planned Parenthood, the most racist organization on the face of this planet," says Fr. Altman.