Catholic Bishop to Pro-Abortion NJ Gov: 'You Have Bowed to the Culture of Death' 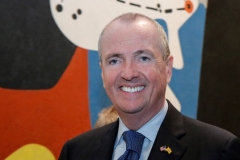 (CNS News) -- After New Jersey's Democratic Gov. Phil Murphy, a Catholic, signed a bill into law last Thursday that essentially allows abortion across the board, Catholic Bishop Joseph Strickland said Murphys is "not a good Catholic," and had "bowed to the culture of death."

The Catholic bishops of New Jersey also issued a statement condemning New Jersey's Freedom of Reproductive Choice Act, "which codifies into state law an individual’s right to an abortion, including late-term abortions."

"This new legislation absolutely and forthrightly extinguishes the human and moral identity of the unborn child," added the bishops.

At the Jan. 13 signing ceremony, Gov.Murphy said,  "The United States Supreme Court is preparing to take a wrecking ball to its own precedent, Roe v. Wade, and that would also demolish our case-law based foundation here in New Jersey,”

"Regardless of whether or not the Supreme Court overturns Roe v. Wade, New Jersey's position in support of the right to reproductive autonomy will remain clear and unchanged," said Murphy.

Murphy also quoted a Jesuit priest who had told the Washington Post that "a good Catholic" could support pro-abortion laws.

No Phil you are not a good Catholic. Please acknowledge that you have bowed to the culture of death. There is no defense for wanton destruction of life. We must all pray for you & all who have succumbed to your delusion. https://t.co/rEOOuYVzau

Bishop Strickland, head of the Diocese of Tyler,Texas, tweeted on Jan. 15, "No Phil you are not a good Catholic. Please acknowledge that you have bowed to the culture of death."

"There is no defense for wanton destruction of life," said Strickland. "We must all pray for you & all who have succumbed to your delusion."

Commenting on the legislation to LifeNews.com, New Jersey Right to Life Director Marie Tasy said, “By signing a bill that enshrines abortion into law with no gestational limits, Governor Murphy signed the death warrant for thousands of innocent children. The heavy handed abuse of the legislative process and backroom deals that were employed to get this bill passed display arrogance, disrespect for the public, and will carry a shameful legacy for this governor and the politicians that sponsored and voted for this egregious bill."

The American Life League called upon the bishops of New Jersey to deny Holy Communion to Murphy "until such time as he repents of his public support for the killing of the innocent and the vulnerable."

The Catechism of the Catholic Church teaches, "Since the first century the Church has affirmed the moral evil of every procured abortion. This teaching has not changed and remains unchangeable. Direct abortion, that is to say, abortion willed either as an end or a means, is gravely contrary to the moral law."  (2271)

In a September 27 address, Pope Francis said of abortion, "it is truly murder."