Catholic Bishop to Voters: 'Abortion' is the 'Sacrifice of Innocent Life' to the 'Demon Deity Molech' 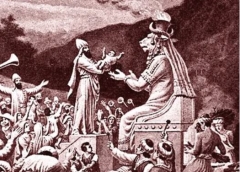 Idolaters offer children as sacrifices to the demon deity Molech.

(CNS News) -- In a letter to the Catholics of Knoxville, Tenn., about the upcoming election, Bishop Richard F. Stika explains how abortion is the "pre-eminent moral issue of our time," that it mirrors the moral depravity of slavery, genocide, the Holocaust, and the "idolatrous" sacrifice of children to the "demon deity Molech," as described in the Old Testament.

In his Oct. 13 letter, "Before you vote, answer these questions," Bishop Stika advises voters to read the party platforms of the candidates running and understand that when they vote for a certain candidate, they are also voting for the party platform and all it entails.

"When you vote for a political candidate, you are in fact empowering their particular party to advance the agenda outlined in their platform," states the bishop. "Whether I choose a candidate because of his personality or because I like his party’s stand on particular issues, we must understand that our vote supports their party’s entire agenda—you buy into the party’s entire program for our country."

The bishop then explains that abortion is the "pre-eminent moral issue of our time," and urges voters to consider several questions.

"[E]ach week in our country approximately 19,000 unborn children are 'surgically' aborted in the most horrific and painful way," states the bishop.  "This number would be significantly higher if the number of 'chemical' RU-486 abortions was counted."

A pregnant woman has her own child murdered during an abortion. (Getty Images)

"Medical science is irrefutable in affirming that human life begins at conception," says Bishop Stika. "So instead of unborn children, if 19,000 Jews or Muslims, Blacks, Hispanics, or Asians were brutally executed each week in our country and their remains thrown in garbage dumpsters, would you vote for the political party that promotes and protects the right to do so?"

"Can you vote for a party whose platform clearly supports, promotes, and will do everything possible to protect the willful destruction of human life on a genocidal scale?" he asks.

He then compares abortion to when slavery was legal. "If you were alive in the mid-1800s up until slavery’s end, would slavery have been a preeminent moral issue for you, or would it have been one issue among many others that you felt equally or more important?" said the bishop.  "Would you have voted for candidates of the pro-slavery political party or would you have voted for those of the anti-slavery political party?"

Also, the bishop asks, " If you lived in the 1800s, would you have voted for a political party that insisted that your tax dollars should support the slave trade and its organizations the same way your tax dollars are being used today to support Planned Parenthood and the culture of death within our nation as well as globally?"

As for the Holocaust, Bishop Stika explains that 6 million Jews were killed by the Nazi Party regime between 1939 and 1945, an average of 1 million deaths per year.

"Over each six-year period since the 1973 Roe v. Wade decision to legalize abortion, approximately the same number of unborn children is exterminated in our country as the total number of Jewish people during the Holocaust," says the bishop.

Jewish prisoners being shipped off to a labor/death camp during WWII. (Public domain)

"Can you vote for a political party that sees nothing morally wrong with the abortion of the unborn on a scale that repeats that of the Holocaust every six years in our country?" he asks.

In the Book of Revelation, there is a scene of a huge red dragon preparing to devour the child of a woman in labor.

"The image recalls the idolatrous practice of child sacrifice to the demon deity Molech that the Israelites, in failing to follow God, practiced to their ruin," says Bishop Stika.  "Are not abortion and infanticide the continued sacrifice of innocent life to this demon deity?"

"Can you in good conscience vote for a political party that promotes what God declared to be an abomination?" says the bishop.

At the end of his letter, Bishop Stika states, "I cannot vote for a political party and its agenda that supports the unrestricted genocide of abortion (19,000-plus human lives a week exterminated). ... I cannot support the party that attacks and condemns the Catholic Church and people of faith for speaking out on matters of faith and morals. I cannot support a party that attacks the sanctity of marriage and the family, for what harms the family, harms society."

"I cannot vote for a party that redefines human sexuality and gender identity and wants to force its ideology driven 'sex education' in our public schools in violation of parental rights," he adds.  "I cannot support the growing acceptance of the grave social error of socialism that the Church has condemned for over 125 years."

"And I cannot support any political party that pushes God out of society and its governing," says Bishop Stika, "for it is the Lord God who is the true King and Ruler that governments and leaders should pattern their manner of governing after."