(CNS News) -- Catholic League President Bill Donohue has sent a letter to Indiana state lawmakers, urging them to denounce the anti-Catholic comments of newly elected Rep. John Jacob (R-District 93) and to exclude him from the Republican caucus.

"At the very least, he should be marginalized by his colleagues," said Donohue.

On Nov. 19, Donohue sent a letter and email directly to Rep. Jacob, mentioning 12 Facebook posts, apparently all written by Jacob, "all of which are virulently anti-Catholic," wrote Donohue. 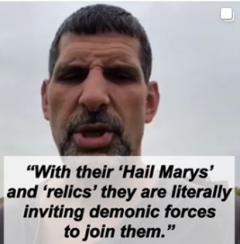 Some of the posts quoted include, "The Roman Catholic Church is not of God but rather of satan and will leave one under the curse of God, unsaved, and on their way to hell."

Donohue said to Jacob, "All of those bigoted posts were written prior to your recent electoral victory. As such, I am asking that you renounce these anti-Catholic remarks and pledge never to make them again."

Donohue invited Jacob to make this pledge by Nov. 30, which "would put an end to this issue."

Jacob, however, never responded, according to Donohue. 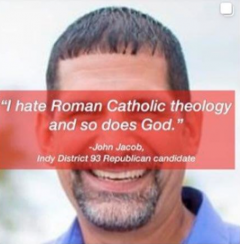 "On November 19, I contacted Indiana state Representative John Jacob, asking him to renounce a series of anti-Catholic remarks he made while running for office, pledging never to make them again. I gave him to the end of the month, November 30, to 'put an end to this issue' (my letter was sent via email and in the overnight mail). He has not replied.

"To see a sample of his bigoted commentary, posted on social media platforms, click here.

"There is no legitimate place for someone like Jacob in public office. Anyone who would post anti-Catholic hate speech on social media is not fit to represent his Catholic constituency. Hopefully, you will read his bigoted posts and let him know of your disdain for his behavior.

"Furthermore, I am requesting that Republican lawmakers, beginning with House Speaker Todd Huston, not to include Jacob in the Republican caucus. Had Jacob made these invidious remarks while in office, I would have asked that he be censured. At the very least, he should now be marginalized by his colleagues." 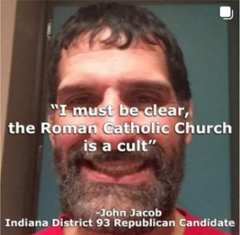 Lawmakers in Indiana have asked Jacob to renounce his bigoted comments. As reported in the Indianapolis Star, "Mike Murphy, a former Republican state lawmaker and former Marion County Republican Party chairman, and Rep. Ed Delaney, D-Indianapolis, who are both Catholics, were among those who called on Jacob to condemn and apologize for the Facebook posts."

"'I've never seen anything like this at the local or state level to demonize, literally he uses the word Satan, to demonize an entire denomination that millions of people in the United States adhere to,' Murphy said. Delaney said the posts are inhumane, disgusting and filled with hate."

"He's attacking a religion which is pretty common in his district and pretty centric in my life," Delaney said of Catholicism, as reported in the Oct. 29  Indy Star.   "I'm pretty troubled with how we are supposed to deal with that in the legislature if he's elected."