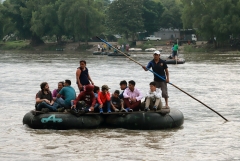 (CNS News) -- The latest numbers from Customs and Border Patrol (CBP) show that there were 178,622 apprehensions at the U.S.-Mexico border in April 2021, what the agency calls "enforcement encounters."

For comparison, under the Trump administration in April 2020, there were 17,106 apprehensions.

In other words, the difference between April 2020 and April 2021 is a 944% increase in enforcement encounters.

These "enforcement encounters" do not include the illegal immigrants who were never apprehended, those who got away into the United States.

On May 11, 19 governors signed a letter about the border crisis that was sent to President Joe Biden and Vice President Kamala Harris.

"We call on you to take action on the crisis at the southern border immediately," reads the letter.  "Contrary to statements from your Administration, the border is neither closed nor secure. ... The crisis is too big to ignore and is now spilling over the border states into all of our states."

"This Administration has enticed a rush of migrants to our border and incentivized an influx of illegal crossings by using irresponsible rhetoric and reversing a slew of policies -- from halting border wall construction to eliminating asylum agreements to refusing to enforce immigration laws," reads the letter.

"Even officials of our neighbor, Mexico, reportedly conveyed concerns that the shift in U.S. policy is stoking illegal immigration and creating business for organized crime," the governors wrote.  "As Mexican President Andrés Manuel López Obrador stated, 'They see him as the migrant president, and so many feel they’re going to reach the United States. We need to work together to regulate the flow, because this business can’t be tackled from one day to the next.”

"The cause of the border crisis is entirely due to reckless federal policy reversals executed within your first 100 days in office," states the letter.