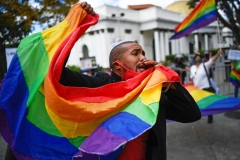 (CNS News) -- In a study designed to gather more data about how "sexual minorities" -- lesbians, gays, and bisexuals -- are affected by COVID, the Centers for Disease Control and Prevention (CDC) found that LGB persons have higher rates of health conditions associated with severe COVID illness than heterosexual persons -- conditions such as asthma, kidney disease, and cancer.

"Sexual minority persons in the United States have higher self-reported prevalences of several underlying health conditions associated with severe outcomes from COVID-19 than do heterosexual persons, both in the overall population and among racial/ethnic minority groups," reported the CDC in its report, Sexual Orientation Disparities in Risk Factors for Adverse COVID-19–Related Outcomes, by Race/Ethnicity — Behavioral Risk Factor Surveillance System, United States, 2017–2019.

For the study over three years, with respondents from 31 states in 2019, "sexual minority" subjects were identified, if they volunteered their sexual orientation as either gay, lesbian or gay, or bisexual. In total, there were 643,956 persons in the study, 24,582 of which identified as a sexual minority.

In a table, the CDC showed some of its findings as follows:

Among heterosexual adults, 8.9% cited asthma as a current health condition and 13.8% of sexual minorities claimed it as well. For suffering from asthma at any time in their lives, 14.1% of heterosexuals said yes, as did 19.8% of LBGs.

The CDC states, "Collecting data on sexual orientation in COVID-19 surveillance and other studies would improve knowledge about disparities in infection and adverse outcomes by sexual orientation, thereby informing more equitable responses to the pandemic."