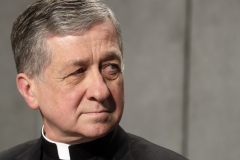 (CNSNews.com) -- Cardinal Blase Cupich, head of the Archdiocese of Chicago, declined to meet with a group of faithful Catholics who wanted to discuss with him how their churches could be reopened for Mass while still following social distancing rules.

"After careful review and consideration, the Cardinal regrets that this is not an opportune time for such a meeting," the cardinal's office said in reply to the St. Charles Borromeo Society.

The Society gathered today in front of Holy Name Cathedral in Chicago to pray for a reopening of the churches in the archdiocese. Attendees followed "all social distancing mandates," according to a press release.

The group states that "Churches are no more dangerous than supermarkets" and that
"we need food for our souls as well as our bodies."  It has called for opening "churches for private prayer and adoration" and for allowing "outdoor Masses and/or parking lot Masses."

In response to Cardinal Cupich's refusal to meet with the group, organizer Joseph Scheidler said, “When would be an opportune time? We are desperately in need of spiritual leadership during this pandemic and that is sorely lacking in the Archdiocese of Chicago."

“In some dioceses across the country bishops have authorized parking lot Masses with attendees staying in their cars,” said Scheidler. “Those who have been locked out of their churches for over six weeks are anxious for a plan -- to know when and how their churches will come back to life.”

"The St. Charles Borromeo Society plans to pray at Holy Name every Friday at noon until the churches are once again open," said the group in their press release. "They also urge other Catholics to launch similar efforts in their own dioceses. For information on the project, visit OpenOurChurches.org."

In their foundational statement, the Society said, "It is not reasonable to assert that there can be 400 people inside your local Costco, with some woman touching every single bag of lettuce on the stack, and then to say that we can’t allow a lesser number of people inside a church.

"It is not honest to say that we need to allow people to buy liquor and marijuana and mocha lattes to help keep them happy, but that we can’t allow our churches to be kept open for private prayer.

"And most of all, it is not honorable to have lines for pizza takeout stretching around the block, while prohibiting churches from finding creative solutions for outdoor services to safely serve their flocks.

"So if respectful Civil Disobedience is what it takes to make this point, then this becomes our duty. When we ponder the sacrifice of Christ, magnified by what the saints were willing to suffer for His sake, we must be willing to take up our cross too."