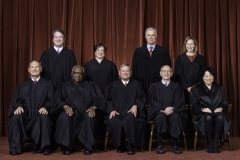 The nine justices of the U.S. Supreme Court. (Getty Images)

(CNS News) -- On Dec. 1, the day the U.S. Supreme Court hears opening arguments in a challenge to a Mississippi law that bans abortions after 15 weeks, the Justice Foundation and numerous other pro-life and pro-family organizations will hold a national and international day of repentance to atone for the sins of abortion, immorality, and the removal of prayer from the public schools.

"As our nation looks on at the proceedings at the Supreme Court and the landmark abortion case of Dobbs v Jackson Women’s Health, unity among those who advocate for life is at an all-time high," states the National Day of Repentence website.

"We come before our Father in humility and repentance on this solemn day, December 1st, the day of the oral arguments on this Supreme Court case," reads the site. "It will not only affect the state of life in the United States, it will affect pro-life policies across the globe."

"America has committed the 4 great sins that can bring national destruction," according to the National Day of Repentance.  "We have forsaken God (1962 Supreme Court Prayer case);  Shedding innocent blood (1973 Roe and Doe); Sexual immorality on a vast scale (repeatedly)" and "Greed."

"We must repent of all these things," states the Justice Foundation and its ministry partners.  "Join believers across the nation for a solemn day of assembly and repentance. Whether you are joining the prayer events in Washington, D.C., or will be praying from home, let us repent, unify our hearts in humility, and appeal to the Lord."

A schedule of events in D.C. for the National Day of Repentance will be posted on the group's website as Dec. 1 approaches. Some of those events will be livestreamed on the website nationaldayofrepentance.org.

To see a video about the event, click here.

If the Supreme Court eventually rules that the Mississippi law is constitutional, it would upend the Roe v. Wade rules on fetal viability, which claim that viability starts at 24 weeks into pregnancy.

In a brief submitted to the high court, the Coalition for Jewish Values, the Jewish Pro-Life Foundation, and several rabbis said, "The history of Judaism includes many existential threats to Jewish life in the form of state sponsored mass murder. This makes us especially sensitive to the plight of children in the womb, whose protection under the law was completely abrogated by Roe v. Wade, Doe v. Bolton and Planned Parenthood v. Casey."

"This tragic human rights violation must be remedied," they wrote.  "The Mississippi law in this case seeks to protect the God-given right to life for babies of 15 weeks gestation and beyond. Yet, most significant developmental milestones occur during the first eight weeks following conception. A baby’s heart beats at 22 days, and her brain-waves can be measured at 6 weeks. At 9 weeks all internal organs are present and the baby is sensitive to touch."