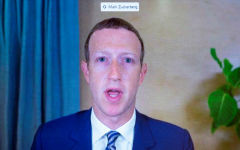 (CNS News) -- In a statement released today, Jan. 7, Facebook CEO Mark Zuckerberg announced that he has closed the Facebook and Instagram accounts of President Donald J. Trump because he is using the platforms to "incite violent insurrection" and "the risks ... are simply too great."

"Over the last several years, we have allowed President Trump to use our platform consistent with our own rules, at times removing content or labeling his posts when they violate our policies," said Zuckerberg.

"We did this because we believe that the public has a right to the broadest possible access to political speech, even controversial speech," he added.  "But the current context is now fundamentally different, involving use of our platform to incite violent insurrection against a democratically elected government."

"We believe the risks of allowing the President to continue to use our service during this period are simply too great," said the multi-billionaire.

"Therefore, we are extending the block we have placed on his Facebook and Instagram accounts indefinitely and for at least the next two weeks until the peaceful transition of power is complete," he concluded.

As the Media Research Center (MRC) has documented, "Big Tech companies," such as Facebook and Twitter, "outraged at President Donald Trump’s win in 2016, put everything they had into ensuring that he would lose in 2020."

"A similar incident happened when the Post released a story showing Biden’s corrupt dealings with China," said the media watchdog. "In a separate national survey, four percent of all Biden voters, had they known the story, would not have voted for Biden. ... According to an analysis done by Newsweek, the suppression worked. The Post’s story only reached roughly half the audience that other viral news stories reached on Facebook."

"Big Tech companies wield an incredible amount of power when it comes to informing and influencing their users," said the MRC. "They knew it and abused that power to help steal a presidential election."

(Disclosure: The MRC is the parent organization of CNSNews.com.)