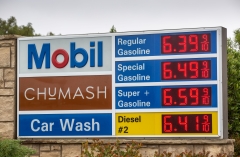 (CNS News) -- A new survey shows that high gas prices are causing "severe" and "moderate" hardships for Americans, and that at least 55% of Americans are altering their summer vacation plans because of the gasoline prices.

In the June 1-20 poll, Gallup asked, "Have recent price increases in gasoline caused any financial hardship for you or your household?"

In response, 22% said the prices were causing a "severe hardship" and 45% said a "moderate hardship."  Gallup combined the two percentages for a 67% "total hardship."

The 67% is up from 52% in April, when Gallup asked the same question. Gallup noted, "Although more Americans say they are experiencing "moderate" rather than "severe" hardship, the percentage describing the hardship as severe has risen from 14% to 22%."

On June 14, the nationwide average price for a gallon of unleaded gasoline was $5.016. When President Trump left office in January 2021, the average price of a gallon of gasoline (all formulations) was $2.37, according to the U.S. Energy Information Administration.

Commenting further on the survey results, Gallup said that the gas-price hardship is "strongly related to household income," and added the following,

Because of the high gas prices, the survey found that 62% of Americans said they are driving less than they usually would this summer.

Also, 55% of Americans "say the price of gas is causing them to alter their summer vacation plans," reported Gallup.

In addition, Americans' economic confidence currently is a negative 58.

"Today's -58 ECI [Economic Confidence Index] score represents a substantially negative skew in public opinion about the economy and is the lowest measured since a -64 reading in February 2009," said the survey firm.  "At the time, the country was still embroiled in the 2007-2009 recession and confidence was starting to recover after hitting the all-time low of -72 in October 2008." 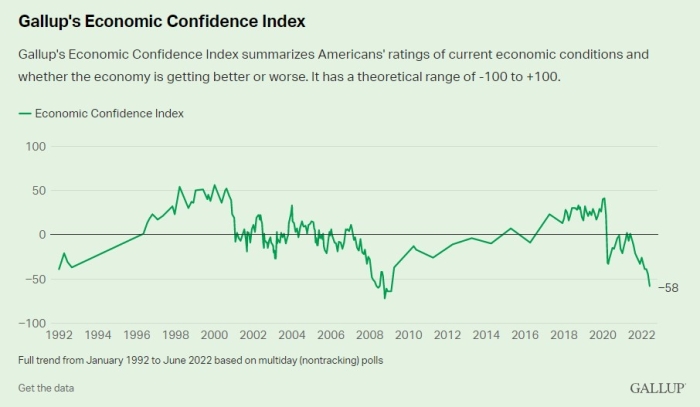