In the poll, Gallup asked, "In general, are you satisfied or dissatisfied with the way things are going in the United States at this time?"

In response, only 24% said they were satisfied. 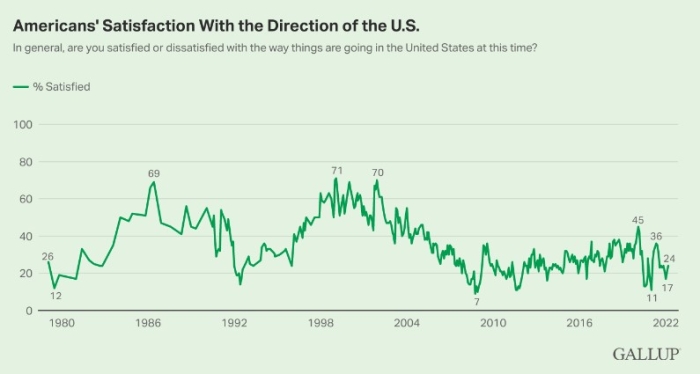 That's up from 17% in January 2022, said Gallup, which also noted that only 7% were satisfied with the country's direction in 2008 following the housing bust.

"The latest reading is from a March 1-18 Gallup poll, which also found President Joe Biden's approval rating mired in the low 40s and economic concerns rising amid record-high gas prices and the highest inflation in four decades," said Gallup.

"Although national satisfaction is now more than double the 11% reading measured shortly after protesters violently stormed the U.S. Capitol on Jan. 6, 2021, it is significantly lower than the 30% to 36% readings of last March through July," reported the survey firm. 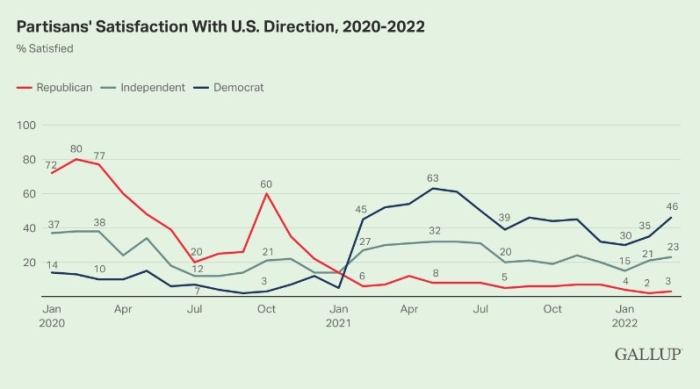 On the political scale, 46% of Democrats said they were satisfied with the way things were going in the U.S., but only 23% of independents and 3% of Republicans said the same.

"Three-quarters of Americans, including majorities of all party groups, are dissatisfied with the nation's direction," said Gallup.  "Even though COVID-19 cases are waning in the U.S., economic concerns are mounting and are likely to continue to suppress national satisfaction until inflation begins to ease."