(CNS News) -- A new survey, completed before Russia invaded Ukraine, showed that 78% of Americans are dissatisfied with the way things are going in the U.S.. In addition, on the economy, 70% said things are getting worse.

This Gallup poll was conducted Feb. 1-17; a random sample of 1,008 American adults, 18 and older, from all 50 states and the District of Columbia, were interviewed by telephone.

Gallup asked, "In general, are you satisfied or dissatisfied with the way things are going in the United States at this time?"

In response, only 21% said they were satisfied while 78% were dissatisfied. 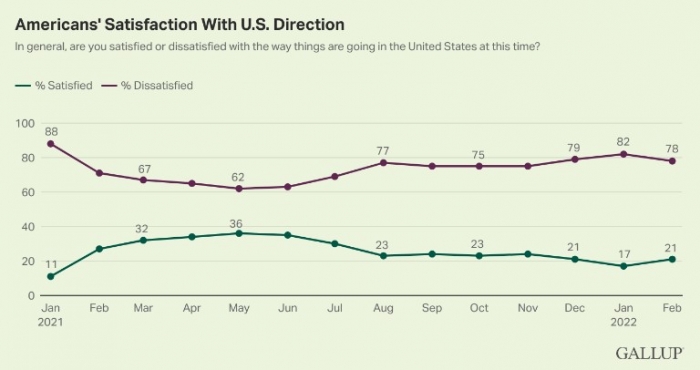 "A year ago, the national mood was brightening as Americans started receiving COVID-19 vaccines, and the economy was opening up in the first months of the Biden presidency," said Gallup.  "But after peaking at 36% [satisfied] last May, Americans' satisfaction with the direction of the country headed back down -- in part due to rising COVID-19 cases but also mounting inflation -- and has yet to recover."

"The latest poll was conducted amid reports that Russia was positioning its military forces along its border with Ukraine, but ended before President Vladimir Putin ordered the invasion of the country," said the survey firm. 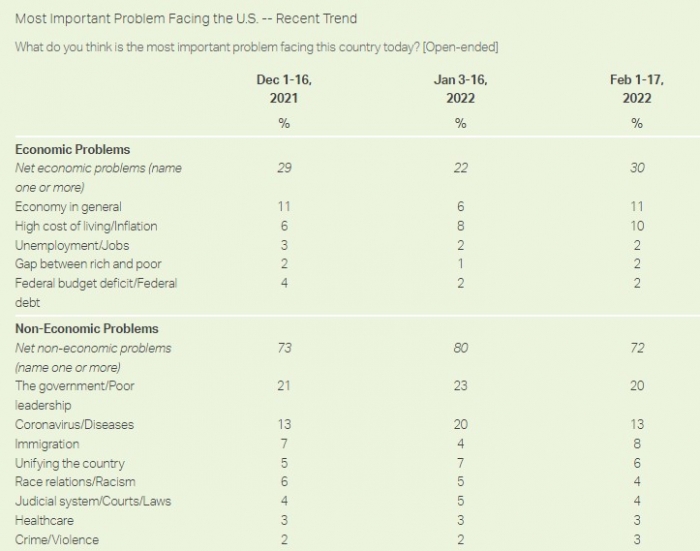 Gallup also asked, "What do you think is the most important problem facing this country today? [Open-ended]"

In response, 30% said the economy. This included the "economy in general" and "high cost of living/inflation," along with several other economic measures. (See chart.) 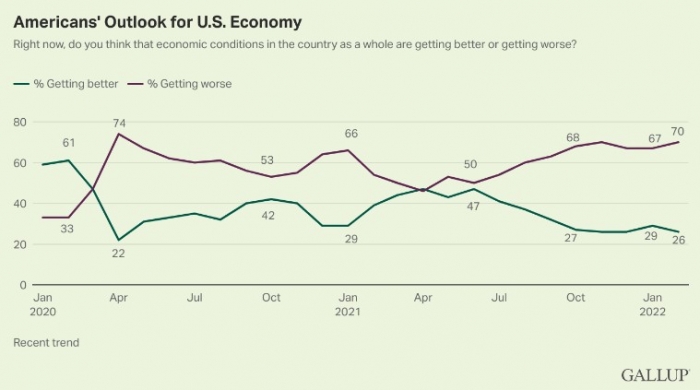 Gallup further asked, "Right now, do you think that economic conditions in the country as a whole are getting better or getting worse?"

"Biden will deliver his State of the Union address to the nation Tuesday evening at a time when Americans are glum about the country's direction," reported Gallup.  "While Americans have a variety of reasons for feeling things are off track, on the whole, the continuation of the pandemic, ongoing inflation and partisan frustrations seem to be at the heart of their discontent."